Don’t Tread on Me, But Let Me Tread All Over You: The Credo of Personal Freedom and Limitless Greed

This slogan has become a farce. It’s a maxim hoisted on those with very little individual power to convince them to join together and become powerful while guarding the door for the wealthy.

Every neighborhood has one.

A yellow flag showing a coiled spring of a snake above the motto, “Don’t Tread on Me.”

In my usually well-manicured suburb, you’ll find it waving bravely over the garbage house.

"The snake is coiled and ready to strike but it is pointed in the wrong direction."

There’s three broken down RVs sitting on the lawn, a busted sofa in the back yard, a rotten picnic bench and several rusted out vehicles in various states of disrepair.

I’m not sure why the owners think anyone would want to tread on them. We’d much rather walk quickly on by without being seen or commented on.

Because in my experience that’s the thing about most of the people who fly this flag.

They’re indignant about anyone stepping on their rights but all too ready to step all over yours.

I remember it wasn’t really too long ago that this flag had no such connotations.

It was simply the Gadsen flag, a relic of the American Revolution. It was nothing more than a reminder of a time when we cherished our national independence from Great Britain and wanted to make sure they knew we didn’t want the King to come back and start ordering us around.

In fact, it was designed by American general and politician Christopher Gadsden in 1775. This “Sam Adams of South Carolina” modeled his patriotic statement first used by the Continental Marines on an earlier famous cartoon from Benjamin Franklin’s Pennsylvania Gazette. 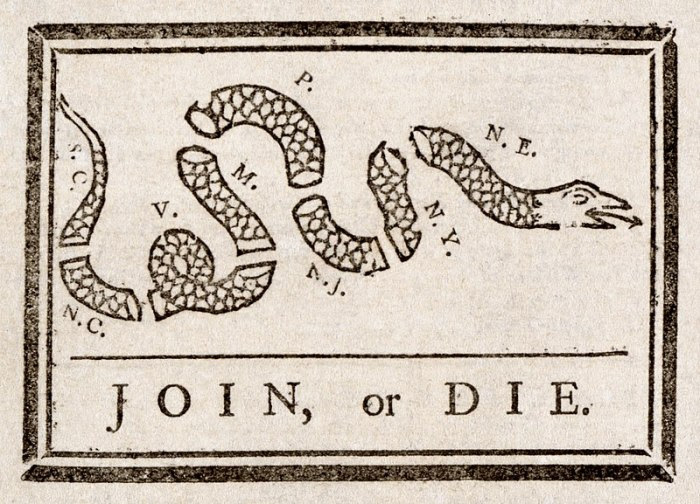 You’ve probably seen it. A snake is cut into several pieces – each representing one of the colonies – with the motto, “Join or Die.”

So originally it was a call for unity, perhaps even federalism. It was a way of framing the argument that we’d be stronger as one nation than as a group of separate states.

Gadsen’s version was really a continuation of that same thought. It was as if he were saying, “Here we are, one unified nation ready to strike to protect itself from tyranny.”

It wasn’t until 2009 that Gadsen’s flag became associated with the radical right.

Like so many hitherto nonpartisan symbols, it was appropriated by the Tea Party movement, which tried to cast their libertarian extremism as somehow harkening back to the American Revolution.

Even the name Tea Party is a misnomer. The original Boston members of the Sons of Liberty who threw British tea into the harbor in 1773 were protesting taxation without representation. Modern day Tea Partiers were protesting the taxes levied by their own duly elected representatives.

They were poor people duped into thinking the rich paid too much despite the fact of gross income inequality and the wealthy not paying their fair share.

It’s this willful ignorance that typifies the contemporary right.

The truth doesn’t matter. It only matters what can be spun into a pithy sound bite that can be broadcast on Fox News or some other propaganda source and then repeated ad infinitum in place of any real debate or conversation.

To be fair, the left does it, too, but not nearly to the same degree.

When a topic makes the rounds of the 24-hour news cycle, you can hear the same canned responses from right and left on just about every channel regardless of who is speaking. The only difference is that the left usually makes at least passing reference to reality while the right closes its eyes and says whatever it believes to be true with perfect conviction.

The Gadsen flag is a perfect example of this hypocrisy.

The motto “Don’t Tread on Me” has come to mean radical individual freedom.

I can do whatever I like and there’s nothing you can do about it.

But there’s never a mention about other people except to limit what they can do in relation to the speaker.

It’s just don’t tread on me and I’ll do whatever I like in relation to you.

After all, many of these personal freedoms the radical right cherishes actually do impact the rest of us.

Moreover, if you teach your kids whatever facts you like, that means you indoctrinate them into your worldview. You don’t give them the chance to see the real world for what it is in case they may have different views on it than you do. This impacts both your children and the country, itself, which will have to somehow run with a greater portion of ignorant and close-minded citizens.

And don’t get me started on discrimination! You think you should be able to say whatever you like to whomever you like whenever you like. It’s fine to wear a t-shirt calling Hillary Clinton a “cunt” but when late night comedian Samantha Bee does the same to Ivanka Trump, you’re up in arms!

You think you can support laws that allow bakers to refuse to make wedding cakes for gay couples but are raving mad when a restaurateur refuses service to Sarah Huckabee Sanders!

This kind of sanctimonious duplicity has real world consequences.

Unarmed black people are shot and killed by police at a much higher rate than white people. Yet you won’t tolerate any protest, condemnation or protest. People can’t assemble in the streets, athletes can’t kneel during the national anthem, you won’t even allow the slogan “Black Lives Matter,” because you say, “All Lives Matter,” while in reality you mean “All Lives Except Black Ones.”

You oppose abortion but no one is forcing anyone to have abortions. In your headlong crusade for individual freedom you want to ensure that others don’t have this choice because they might choose differently than you. Or at least they might choose differently than you SAY you do, because when the light of day is cast upon you, we find an alarming number of hypocrites here, too.

There are too many far right politicians who campaign on overturning Roe v. Wade who pressure their mistresses to abort the unwanted issue of their indiscretion.

The underlying cause of such myopia is a perverse focus only on the self.

You look at what you want for you and pay no attention at all to what others should likewise be allowed.

It is the underlying selfishness of post Enlightenment Western thought come back to haunt us.

Hobbes and Locke and Smith told us that greed was good.

It’s what makes the world go round.

You look to your self-interest, and I’ll look to mine, and that’s what’s best for everyone.

However, they forgot that everyone doesn’t have the same power – physical, social, financial or political. Some people are strong and some are weak. Some are rich and some are poor. If you pull the shortest straw at the lottery of birth, you won’t be able to get the same things for yourself as those who won it as soon as the doctor slapped their newborn bums.

So we have layers and layers of class and economics. We have social structures designed to keep black people here and Hispanics there and white people at the top. We have a society that worships the rich and bedevils the poor. We have belief systems that praise one kind of sexuality only and demonizes anything that diverges from that norm. And the most defining thing of any newborn baby is what you’ll find between its legs.

“Don’t Tread on Me” has become a farce.

It’s a maxim hoisted on those with very little individual power to convince them to join together and become powerful while guarding the door for the wealthy.

They sit atop their mountains of trash as if they were dragons on piles of gold.

And they point their pitchforks at the rest of us as if we wanted a piece of it.

In this way, they make themselves the willing patsies of the ruling class.

It’s a sad thing to behold.

Because if we all just stopped for a second and recognized our common humanity, we’d agree that the status quo is unacceptable.

If we were more concerned about the rights of all than just our own rights, we’d agree that the wealth of this great nation has not been fairly distributed.

The snake is coiled and ready to strike but it is pointed in the wrong direction.

It should be a sea of snakes, a great slithering mass of humanity, hissing and spitting with venom, our reptilian eyes focused on the elites.

Don’t tread on me?

Robert C. Koehler
Election Theft and the Reluctant Democracy
END_OF_DOCUMENT_TOKEN_TO_BE_REPLACED
Connect With Us

END_OF_DOCUMENT_TOKEN_TO_BE_REPLACED

Coinciding with the news New York's A.G. is suing to dissolve the mass-murdering NRA - "thoughts and prayers" - March For Our Lives has launched their first TV ad, on Fox yet. Facing an election where for the first time younger and/or darker voters will make up a third of the electorate - and targeting those voters in nine swing states - the devastating ad portrays America's often-racist gun violence before pivoting to warn those in power, "Yo ung people will determine the nation's future."
Read More...
END_OF_DOCUMENT_TOKEN_TO_BE_REPLACED