Wall Street scams and risk-taking were a main driver of the 2008 crisis, but no senior executive from a Wall Street bank went to jail

Senator Elizabeth Warren (D-Massachusetts) has introduced legislation — The Ending Too Big to Jail Act — that would hold big bank executives accountable when the banks they lead break the law. 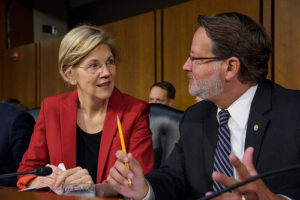 Ten years ago, the Federal Reserve announced action to try to save Bear Stearns from failing, marking the beginning of a financial crisis that would cost the U.S. economy as much as $14 trillion.

Wall Street scams and risk-taking were a main driver of the crisis, but no senior executive from a Wall Street bank went to jail, Warren said.

The Ending Too Big to Jail Act creates a permanent law enforcement unit to investigate crimes at financial institutions, requires senior executives at banks with $10 billion or more in assets to certify annually that they have conducted due diligence and found no criminal conduct or civil fraud within the financial institution, and mandates judicial oversight of deferred prosecution agreements (DPAs).

“When Wall Street CEOs break the law, they should go to jail like anyone else. The fraud on Wall Street won’t stop until executives know they will be hauled out in handcuffs for cheating their customers and clients,” Warren said. “Instead of passing the Bank Lobbyist Act, Congress should be marking the tenth anniversary of the financial crisis by strengthening rules on banks and bankers so Wall Street can never again get away with cheating Americans and crashing the economy.”

The bill reconstitutes the Special Inspector General for the Troubled Asset Relief Program (SIGTARP) as the Special Inspector General for Financial Institution Crime (SIGFIC) and expands its jurisdiction so that it can use its specialized skills and expertise, relationships with financial regulators and law enforcement agencies, and cross-jurisdictional view of the whole financial industry to investigate and help prosecute financial crimes.

The bill also requires big bank executive certifications. Specifically, the bill requires top executives of financial institutions larger than $10 billion to certify annually that they have conducted due diligence and found no criminal conduct or civil fraud within their institution. Bank executives often pled ignorance to wrongdoing during the financial crisis. Requiring executives to do due diligence will stop them from insulating themselves from accountability and force them to keep track of the conduct at their banks.

The certification will also help law enforcement hold individuals accountable because making a false sworn statement to the government is itself a crime.

The bill mandates judicial oversight of deferred prosecution agreements. It gives courts authority to approve and oversee compliance with DPAs. After the financial crisis, the Justice Department often entered into unreviewable DPAs with financial institutions instead of going after individual executives. This bill mandates judicial oversight of these agreements, requiring courts to determine that an agreement is in the “public interest” before it can take effect and allowing courts to supervise implementation, request status reports, approve termination, and order that documents be filed on the public docket.  The Department of Justice would also be required to establish a public searchable database of DPAs.

The Ending Too Big to Jail Act has been endorsed by the AFL-CIO, Public Citizen, Americans for Financial Reform, and Professor Brandon Garrett of the University of Virginia Law School, author of Too Big to Jail: How Prosecutors Compromise with Corporations.

Only Oversight of Oversight Will Keep Profiteers From Siphoning Stimulus Money Into Their Own Wallets
More in:
Economy, U.S.
,
Elizabeth Warren, Wall Street, US Senate

END_OF_DOCUMENT_TOKEN_TO_BE_REPLACED

Protests continue against Louisville's grotesque decision to deny justice to Breonna Taylor but afford it to her neighbors' walls in an indictment that, after months of demands to Say Her Name, literally doesn't mention her: " It’s as if she was never there." In a dark twist, her killers were acquitted on the same date as Emmett Till's; his prescient mother had warned, if he didn't get justice, "It won't be safe for a Negro to walk the streets anywhere in America" - or, it turns out, sleep.
Read More...
END_OF_DOCUMENT_TOKEN_TO_BE_REPLACED