Few Kids in the World Can Pass America’s Common Core Tests, According to New Study

“Advocates who push for school improvement on the grounds of questionable benchmarks are not strengthening education and advancing American interests, but undermining public schools and weakening the United States.”

"Standardized testing is a gun, and we have been demanding schools shoot themselves in the foot with it." (Image: 4tests.com/with overlay)

Could you jump through a hoop?

Probably if it were lying on the ground.

But what if it were held slightly higher? Let’s say waist high? Sure.

Shoulder height? Maybe with some practice.

How about if we raised the hoop to the rafters of a three story auditorium? Could you jump through THAT?

No. Of course not.

You could train with the world’s greatest coach, with the best equipment, 24-hours a day and you still couldn’t jump that high.

Yet that’s kind of what the U.S. has been expecting of its public school students – minus the resources.

We hold the hoop ridiculously out of reach and then blame them when they can’t jump through it.

But don’t take my word for it.

This is the conclusion of a new study that came out in January called “How High the Bar?” by the National Superintendents Roundtable and the Horace Mann League.

They found the benchmarks for passing the National Assessment of Educational Progress (NAEP) and American Common Core tests put success out of reach for most students the world over.

The difference is the NAEP is only meant to compare how other countries stack up against each other. Common Core tests, on the other hand, apply exclusively to kids within the US.

No one’s actually expected to pass the NAEP. It’s only given to a sample of kids in member nations and used to rank international education systems. The U.S. government, however, gives almost all its students Common Core tests and expects them all to pass – in fact, failure to do so could result in your public school being closed and replaced with a charter or voucher institution.

However, in both cases, the study concluded the score needed to meet the bare minimum of passing was absurdly too high – so much so that hardly any group of children in the entire world met it.

It’s important to note that these aren’t standardized testing skeptics.

They believe in the assessments. They even believe in Common Core. What they don’t believe in is the benchmarks we’re expecting our kids to meet to consider them having passed.

And this has massive consequences for the entire education system.

The media has uncritically repeated the lie that American public schools are failing based almost exclusively on test scores that show only one third of our students passing.

But if the same tests were given to students the world over with the same standard for success, even less would pass it, according to the study. If we drew the red line on the NAEP at the same place we draw it on Common Core tests, almost every child in the world would be a dunce.

In fact, the percentage of our students who do pass under these ridiculous benchmarks often exceeds that of other countries.

So when you hold kids up to impossible standards a few actually make it – and more of our kids do than our international peers.

We have a high stakes standardized testing system that not only does not assess kids fairly, but it actually hides their success!

In the words of the study’s authors, “…the analysis suggest the U.S. has established benchmarks that are neither useful nor credible.”

How did this happen?

It comes down to one word – proficient.

If you’re proficient, it’s thought you’re competent, you are able to do something. You might not be incredible at it, but you can get the job done.

Hey. Did you hear about my leaky faucet? The plumber fixed it after three tries because he’s proficient at his job.

Oh really? My plumber fixed my leaky faucet in only one try and didn’t even charge me because she’s advanced at her job.

That sort of thing.

There are only four scores you can achieve on most standardized assessments: Advanced, Proficient, Basic and Below Basic. The first two are considered passing and the last two are failing.

However, this doesn’t line up with the five general grades most public schools give in core subjects:

A-D is usually considered passing. Only F is failing.

Advanced – A and B

However, that’s not how they line up on NAEP. According to Diane Ravitch, who served on the National Assessment Governing Board, the federal agency that supervises NAEP, they line up like this:

Below Basic – D and F

This is important, because saying someone scored a proficient on the NAEP doesn’t mean they’re just okay at it. It means they’re excellent but have room to improve.

The problem is that when developers of Common Core tests set their benchmarks, they used almost the same ones as the NAEP. Yet the NAEP benchmarks were never meant to be the same as grade level ones. Confounding the two puts mere passing out of reach for most students.

In short, American students are doing B work on their Common Core tests and failing with a Basic. Yet in other countries, this would be passing with room to spare.

Moreover, when you hear that only one third of American students are Proficient or above, that means only one third are doing A or A+ work on their Common Core tests. That’s actually rather impressive!

According to the study:

“National judgments about student proficiency and many state Common  Core judgments about “career and college readiness” are defective and misleading…  According to NAEP officials, Proficient does not mean grade level performance. The misuse of the term confuses the public. The effects of this misuse are reflected in most Common Core assessments…

NAEP’s term “Proficient” does not even mean proficient. “Students who may be proficient in a subject, given the common usage of the term, might not satisfy the requirements for performance at the NAEP achievement level.”

The report even cites other independent analysts that have come to similar conclusions such as the U.S. General Accounting Office, the National Academy of Sciences, and the Brookings Institution.

“Advocates who push for school improvement on the grounds of questionable benchmarks are not strengthening education and advancing American interests, but undermining public schools and weakening the United States.”

The study was conducted by comparing performance of foreign students on international tests of reading, mathematics, and science NAEP with American Common Core tests.

Very few foreign students were able to score high enough on the NAEP to meet what is considered proficiency on Common Core tests.

In fact, in 4th grade reading, not a single nation was able to meet the benchmark.

In 8th grade math, only three nations (Singapore, South Korea and Japan) had 50 percent or more students who could meet the criterion.

In 8th grade science, only one nation (Singapore) had 50 percent or more students meeting the benchmark.

Even though the benchmarks are unfair and few nations children could meet them, the percentage of U.S. children who did meet them was higher than most other nations. 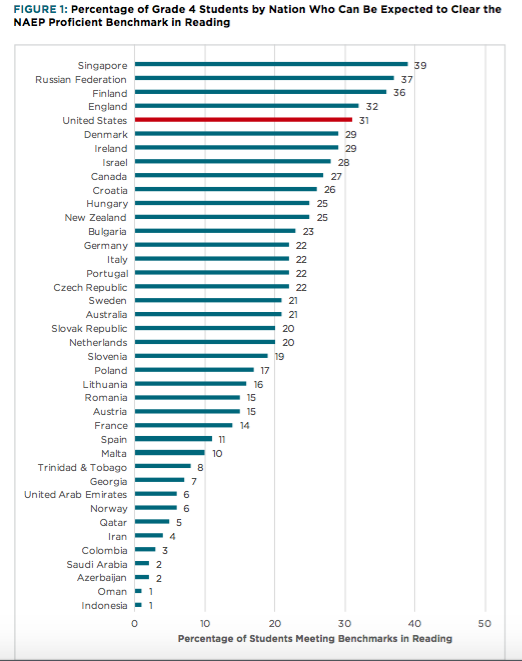 No one had 50% or more of its kids scoring a proficient or advanced. But 31% of U.S. kids actually met the benchmark, putting us fifth behind only Singapore, the Russian Federation, Finland, and England.

Only 31% of our kids could do it, but only four other nations out of 40 could do better.

That’s kind of impressive. Yet judging our scores in abstraction solely on this unrealistic proficiency standard, we’re failures. The whole process hides how well our kids actually do.

Bottom line, Common Core benchmarks are too high and paint an unfair picture of our education system, according to the study:

“When citizens read that “only one-third” or “less than half” of the students in their local schools are proficient in mathematics, science, or reading, they can rest assured that the same judgments can be applied to students throughout most of the world…

Globally, in just about every nation where it is possible to compare student performance with our national benchmarks, the vast majority of students cannot demonstrate their competence because the bars are set unreasonably high.”

At very least, this invalidates the scores of every Common Core test yet given in this country. It demands we set new benchmarks that are in line with grade level performance.

At most, it casts doubt on the entire process of high stakes standardized testing.

It demonstrates how the data can be manipulated to show whatever testing corporations or other interested parties want.

Standardized testing is a gun, and we have been demanding schools shoot themselves in the foot with it.

Instead of trying to hold our schools to impossible standards, we should be holding our lawmakers to standards of common decency. We should concentrate on equitable funding, reintegration, and supporting our public school system and public school teachers. Not enriching private testing corporations so they’ll paint a misleading picture of student performance to justify pro-privatization schemes.

When will our policymakers rise to meet the benchmarks of honesty, empathy and caring about the well-being of children?

In the final analysis, that may be a bar they are simply incapable of reaching.

Beyond Bridges and Roads, Bowman Makes Case for 'Care Infrastructure'

END_OF_DOCUMENT_TOKEN_TO_BE_REPLACED

It never ends. Even as another cop kills another black guy in Minneapolis, harrowing video shows yahoo unfit cops in Virginia pulling guns on, screaming at, pepper-spraying, kicking, handcuffing and threatening to execute Lieut. Caron Nazario, a black Latino member of the U.S. Army Medical Corps in his uniform for...NOTHING. "Why am I being treated like this?" Nazario keeps asking. Brutally simple: America, racism, "domination and humiliation of a black man" - again.
Read More...
END_OF_DOCUMENT_TOKEN_TO_BE_REPLACED