SUBSCRIBE DONATE
Published on
Friday, February 05, 2021
by
The Progressive

The events of January 6 were firmly planted on an intersectional foundation that included white supremacy, sexism, and misogyny.

Supporters of U.S. President Donald Trump gather near the U.S. Capitol building in Washington, D.C., the United States, on Jan. 6, 2020. U.S. President-elect Joe Biden condemned what he called "insurrection" at the U.S. Capitol on Wednesday, after some supporters of the Republican incumbent, Donald Trump, broke into the building, forcing electoral vote counting to halt. (Photo by Liu Jie/Xinhua via Getty) (Xinhua/Liu Jie via Getty Images)

Pundits eager to dissect the origins of the January 6 insurrection at the U.S. Capitol rarely include the misogynist anti-abortion movement in their musings. But they should.

“There was anger, yes, but the ha-ha joy at how much they could do to take down a palace of power was the same as the Rambo-like ‘clinic invasions’ we saw in the late 1980s and early 1990s. It is the presumed entitlement of bullies.”

Not only did many prominent anti-abortion groups and individuals attend the gathering—including Operation Save America leaders Frank Campana, Ante Pavkovic, and Jason Storms; former Planned Parenthood staffer—now an outspoken antiabortionist—Abby Johnson; convicted clinic bomber John Brockhoeft; and clinic harasser turned West Virginia House of Delegates member Derrick Evans—but racism, vitriolic hatred of socialism and communism, and reverence for militarism have for decades been a part of the ideology gluing violent opponents of abortion to the broader cause.

In fact, the Klan and Christian Identity movements have long been anti-abortion. What’s more, as reported in Targets of Hatred: Anti-Abortion Terrorism, twenty-five years ago leaders of this wing of the anti-choice movement championed presidential candidate Howard Phillips in his 1996 run for office. Phillips’s U.S. Taxpayer Party pledged to prosecute abortion providers, appoint judges who acknowledged “the legal personhood of the unborn child,” and end “special protections and privileges for practitioners of buggery.” Phillips also promised to pull the United States out of the United Nations and NATO, end federal support for the National Endowment for the Arts, and close the Department of Education.

While the U.S. Taxpayer Party (the name was later changed to the Constitution Party) did not explicitly discuss race, white power, or the maintenance of white supremacy, Dr. Carol Mason, a professor at the University of Kentucky who has monitored and written about the anti-abortion movement for two decades, emphasizes that there is an inherent overlap between white nationalist, violent anti-abortion, and anti-government movements.

“White supremacy folds neatly into anti-abortion ideology,” Mason tells The Progressive. “The fear of white demographic decline, coupled with an apocalyptic mindset, has been bubbling up in anti-abortion rhetoric for years. ‘We,’ which of course is coded as white people, are killing the future of the nation. ‘We’ have to act now to save the country.”

Mason adds that opposition to abortion undergirds groups like QAnon, since categorizing abortion as a satanic industry that feeds on blood has been a staple of anti-abortion argument since the early 1980s. “The satanic need for blood has been recycled in conspiracy theories,” she explains. “Satanic rituals and the sacrifice of babies and small children also comes up in far-right Christian fiction,” and works to reinforce the idea that some among us have a craven need for human blood.

Other parallels also exist, including the notion of a leaderless resistance. The anti-abortion Army of God, whose first act was the kidnapping of abortion provider Dr. Hector Zevallos and his wife, Rosalee Zevallos, in 1982, is one example.

“The Army of God was more a mindset than an organization,” Mason says. “This set-up achieves two things. It allows violent actors to be seen as ‘lone wolves,’ carrying out attacks as individuals, and it allows the larger anti-abortion movement to remain unaccountable for acts of violence, no matter how incendiary their language linking abortion to murder, and providers to murderers, has been.”

Furthermore, she continues, movement activists—whether they identify as anti-abortion, anti-government, white supremacist, or all three—see themselves as “victim warriors” who are calling on low-level government office holders to break ranks and rise up against “federal tyranny.”

Then there’s service to God, which adds another layer of potency to the warrior mentality. Take Operation Save America’s Campana, Pavkovic, and Storms. For them, January 6 was a chance to establish “the Lord’s Beachhead.” As they reported on Facebook two days after the riot, the insurrection was an opportunity to ignite national repentance for a raft of societal sins.

“We have murdered 60 million babies,” they wrote. “The fact that we have rebelled against the Created Order of one man and women and embraced the deviant perversion of the Sodomite God is the main reason we face conquest by communist fanatics and lunatics.”

These exhortations had the desired impact, says Peg Johnston, executive director of Southern Tier Women’s Health Services in upstate New York. As she watched the action unfold on television, she noted how revved up and giddy many of the participants were.

“There was anger, yes, but the ha-ha joy at how much they could do to take down a palace of power was the same as the Rambo-like ‘clinic invasions’ we saw in the late 1980s and early 1990s,” Johnson says. “It is the presumed entitlement of bullies.”

“It was about exerting power and control over others,” agrees Charlotte Taft, former director of the now-closed Routh Street Women’s Clinic in Dallas. “They were on a crusade on January 6, the same as the anti-abortion folks who harass patients and clinic staff and try to disrupt the delivery of health care at clinics.”

Both Johnston and Taft agree that this commonality merits further scrutiny by pro-choice activists and scholars. 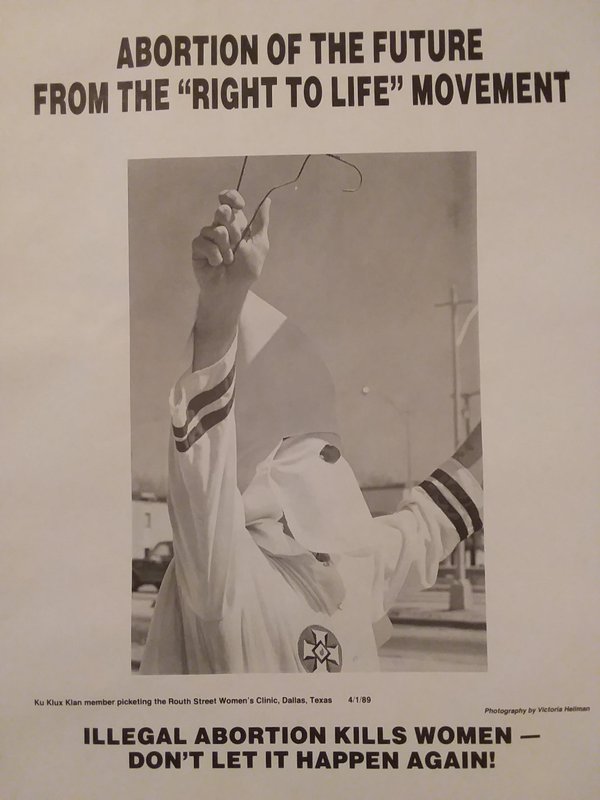 That research has already begun. Erin Matson of Reproaction, a six-year-old direct action and opposition research group that works to promote reproductive justice, notes that preliminary study has revealed that the events of January 6 were firmly planted on an intersectional foundation that included white supremacy, sexism, and misogyny. She further cautions that as we try to come to terms with what happened, we should see these factors as intertwined forms of hatred.

“We have to look at the connections between them,” Matson says. “For too long, mainstream researchers who analyze the U.S. rightwing have minimized the centrality of both woman-hating and anti-abortion violence to the perpetuation of racism, seeing it as a sideshow to the real problem of racial inequality. They’ve seen abortion as a tangential, lightning rod, social issue that is not integral to white supremacy and they have failed to appreciate how access to reproductive care is part of the struggle for racial and gender justice.”

The upshot of this is that January 6 brought diverse rightwing factions together for a unified action. “This is what makes it historic,” University of Kentucky’s Mason says. “The rhetoric used was meant to build alliances. We don’t know yet if this will last.”

Eleanor J. Bader is a teacher, freelance writer and activist from Brooklyn, NY. She is also the co-author of Targets of Hatred: Anti-Abortion Terrorism, St. Martin's Press, 2001.

The Right Is Using the Capitol Riot as an Excuse to Target Activists on the Left
More in:
U.S.
,
Women, Reproductive Rights, Jan 6 Insurrection, Extremism

END_OF_DOCUMENT_TOKEN_TO_BE_REPLACED

CPAC 2021! Wingnut City! Its first day of lunacy featured Ted 'Braveheart' Cruz shrieking "FREEDOM!" and Kimberly 'THE BEST IS YET TO COME!" Guilfoyle yelling "communists want to see our nation burn" and an SS-insignia-shaped stage, but the highlight was when they broke out the Golden Calf, a gold Trump statue in stars-and-stripes shorts with a magic wand, because somehow all these Christians never got to the part in the Bible about false idols. Who are these people and can they leave soon?
Read More...
END_OF_DOCUMENT_TOKEN_TO_BE_REPLACED