SUBSCRIBE DONATE
Published on
Tuesday, September 29, 2020
by
The Progressive

Can You Afford to Breathe in the Pacific Northwest?

As climate change worsens wildfires each year, unhoused people in Oregon and Washington experience the worst of the smoke.

Even if you’ve never visited the Pacific Northwest, you might have a mental image of what the region looks like. Essentially, everything west of the Cascade Range is a temperate rainforest, with tall, moss-covered trees and lush greenery providing plenty of oxygen to the area’s inhabitants.

“What we need is housing for all. It’s not profitable to house people who can’t afford it, but it’s the right thing to do.”

But in the two weeks after Labor Day this year, aided by a months-long regional drought and an extreme wind event, Oregon and Washington were as flammable as California, which has been notorious for destructive wildfires in recent years.

Blazes in Oregon were out of control, effectively destroying small towns across the state. These fires, combined with those in eastern Washington and northern California, blanketed the Pacific Northwest in thick, toxic smoke, with no respite in sight.

Throughout the week of September 7, public health officials advised residents to stay inside and shut their windows, as breathing in this much bad air for an extended period of time can potentially lead to a range of long-term health effects.

Many Oregon and Washington residents, however, couldn’t stay inside. According to a

2018 federal report from the United States Department of Housing and Urban Development, both states top the list for the highest rates of homeless individuals. Between 2007 and 2018, Oregon’s unhoused population went up by 12.8 percent, while Washington’s increased by nearly 24 percent.

In 2018, there were more than 36,000 people experiencing homelessness in Oregon and Washington combined, with almost 20,000 of those people living unsheltered. And with country-wide layoffs in the midst of COVID-19, little government assistance, and the destruction wrought by the wildfires, those numbers aren’t expected to improve any time soon.

Inez Cooper is a thirty-eight-year-old woman who lives in Eugene, Oregon, located about 100 miles south of Portland. Eugene is a college town, home to the University of Oregon and more than 170,000 people. It also has the highest rate of unhoused individuals, per capita, in the nation. 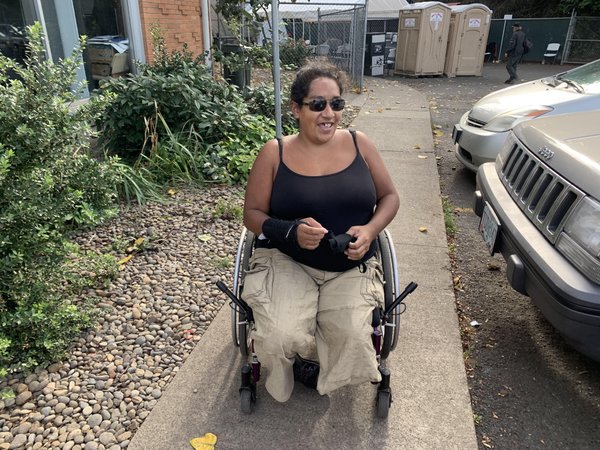 Cooper has been staying at a local facility that provides military-style tents where people experiencing homelessness can sleep. This facility, located about a thirty-minute bus ride from downtown Eugene, has recently increased its capacity, but due to COVID-19 public health requirements, it has very limited indoor space during the day.

Cooper says that, during the ten-day period when the air quality in Eugene was really dangerous, the facility didn’t have indoor space available for its residents. She says that unless they could find another place to go, there were a few hours during the day where everyone had to sit outside in the smoke.

“I had a friend who let me come over to his place. The first time I went over there, I was just covered in ash,” she says. “It was pretty smoky all around.”

Cooper suffers from multiple chronic health conditions, including asthma and chronic migraines, and uses a wheelchair. According to a 2019 Point in Time Count for Lane County, where Eugene is located, almost 40 percent of unhoused individuals were chronically homeless, often indicative of a mental or physical disability. In Multnomah County, which includes the city of Portland, more than 70 percent of all unhoused people are disabled.

These disabilities not only make it difficult for people to secure work or get permanent housing—Cooper says that she has found it nearly impossible to find housing that would accommodate her wheelchair—but they also vastly increase vulnerability to harmful weather events, like the smoke. In the presence of a global pandemic that targets the respiratory system, this is even scarier.

Wildfires pose a uniquely hazardous threat . A 2019 University of Washington School of Medicine article says that because wildfire smoke contains particulates(pieces of burnt plant material that are less than 2.5 micrometers), it’s easy for unknown matter to accumulate in a person’s lungs. When wildfires come into contact with human-made materials, like plastic and trash, the smoke becomes even more toxic.


Cities across the Pacific Northwest offered some resources to their unhoused community members during the wildfires, but many say that those weren’t enough. And even if these cities offered more substantial resources for unhoused people to get some respite from the smoke, there has been a breach of trust between unhoused communities and city officials.

Daniel Rushton, an activist based in Portland, works with unhoused people to provide water and sanitation supplies for their communities. He says that people experiencing homelessness in Portland have no reason to trust the city to provide them with adequate help during a crisis.

“No one has any misconceptions that the city gives a shit about their wellbeing,” Rushton says. “It’s hard to say how the city could improve. They’re doing so little that if they were to do anything else, it would be better.”

Rushton says that throughout the COVID-19 pandemic and the wildfire smoke, the city of Portland has made excuses to sweep camps of unhoused people out of public areas, citing social distancing concerns or fire hazards.

“They don’t actually care about fire hazards, they only care because a private property owner complained about them,” Rushton says.

But even as local governments have failed to provide for their unhoused communities, the Pacific Northwest is rich with mutual aid groups, direct action coalitions, and individual people who just want to help out. 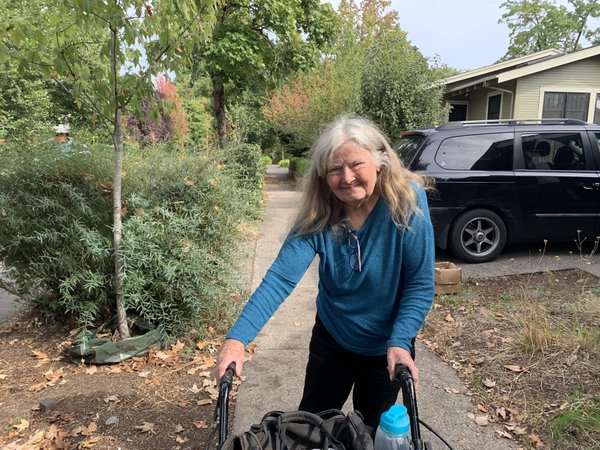 Pat Hadley is a seventy-five-year-old woman in Eugene who has been unhoused since she was evicted from low-income housing two years ago for letting her family stay with her before they passed background checks. She is currently living in a tent in a local homeless advocate’s backyard, and says that, while the city hasn’t provided her with much help, the neighbors have been great.

“That’s how I survive out here, the people,” Hadley says.

She says that local mutual aid groups have been passing out N95 masks to people on the streets to help filter out bad air. Other groups in Eugene have given out food, medical care, and raised money for unhoused people to stay at local hotels during the fires.

Seattle and Portland have both had extensive Black Lives Matter protests this summer—most recently, both have been designated “anarchist jurisdictions” by the U.S. Department of Justice—and activist groups there are stronger than ever.

When the protests against police brutality in Portland receded due to the wildfires, mutual aid groups  involved with the protests shifted their efforts to helping people who’ve been impacted..

“There are things you can do right now to help the people around you,” Rushton says. “The protests are the fruit of people feeling extreme empathy and righteous anger and love. It’s made it much easier to get involved and to find ways to fill a need.”

The Pacific Northwest, which has previously been expected to fare better than other regions of the country as the climate warms, wasn’t ready for these fires. As climate change worsens, which is happening faster than expected, the region will only be more of a tinderbox.

Droughts and hot temperatures across the region will mean larger fires every year, and as more people are displaced by climate catastrophe, they’ll need a place to go.

“What we need is housing for all. It’s not profitable to house people who can’t afford it, but it’s the right thing to do,” says Indi Keith, a climate justice activist in Portland. “Climate justice is also everything else.”

Taylor Griggs is a freelance writer based in Eugene, Oregon. Find her airing her grievances on Twitter at @taylorjgriggs.

END_OF_DOCUMENT_TOKEN_TO_BE_REPLACED

The jury verdict that former cop and unrepentant sociopath Derek Chauvin is thrice guilty for murdering George Floyd for the nine minutes and 29 seconds of filmed savagery we all saw brings some solace and hope: Finally, a killer cop is declared a killer cop. Alas, one case does not systemic change make. J u stice would be George Floyd still alive. Accou ntability, a heedful first step, is Chauvin being found guilty for why George Floyd isn't still alive.
Read More...
END_OF_DOCUMENT_TOKEN_TO_BE_REPLACED