SUBSCRIBE DONATE
Published on
Friday, June 28, 2019
by
The Philadelphia Inquirer

Explosions! Floods! Cancer! What More Will It Take for Pa. to Ditch Fossil Fuels?

Let’s close the loop that started in 1859, and we’ll look back on June 21, 2019, not as a catastrophe but as the first day of Pennsylvania’s green and glorious new era

by
Will Bunch
0 Comments

Climate change isn’t just for policy makers—that there are things that you, Ms. or Mr. Everyday Person, can do! (Photo: NBC10)

The rusty old site hard by the riverbank used to be a dirty belching epicenter of this Pennsylvania city’s Industrial Revolution economy. Much like South Philadelphia’s iconic 19th-century oil refinery, the ancient Jones and Laughlin steel mill complex along the Monongahela River was part of a trail of smokestacks and smog that once defined Pittsburgh, but is now overgrown with weeds and the rust corroding its massive furnaces and rail yards.

Today, though, the 178-acre site just three miles from the center of Pittsburgh’s downtown is called Hazelwood Green, and its developers are raising funds for the lengthy job of not just cleaning up the pollution but reinventing this prime real-estate as a tech center that will be powered by green-energy projects and criss-crossed with bike paths and riverside trails.

The Pittsburgh project is both a vision of a cleaner future and an acknowledgement of the obvious: The era of Big Steel is over.

It’s already way past time for Philadelphia and the rest of Pennsylvania to concede that the global fossil fuel revolution that started right here in the Keystone State (at the Drake well, in Titusville, in 1859) is also dead and gone, and that it’s time to start planning for a green 21st century.

That alarm clock finally went off at 4:22 a.m. on a Friday morning, as cameras covering a raging fire at the Philadelphia Energy Solutions refinery along the Schuylkill River captured a massive fireball near the Platt Bridge, so intense that weather satellites detected the heat from far above the earth. It took more than a day to extinguish the blaze that, for now, has shut down the largest oil refinery in the East Coast and caused an upward blip in gas prices. 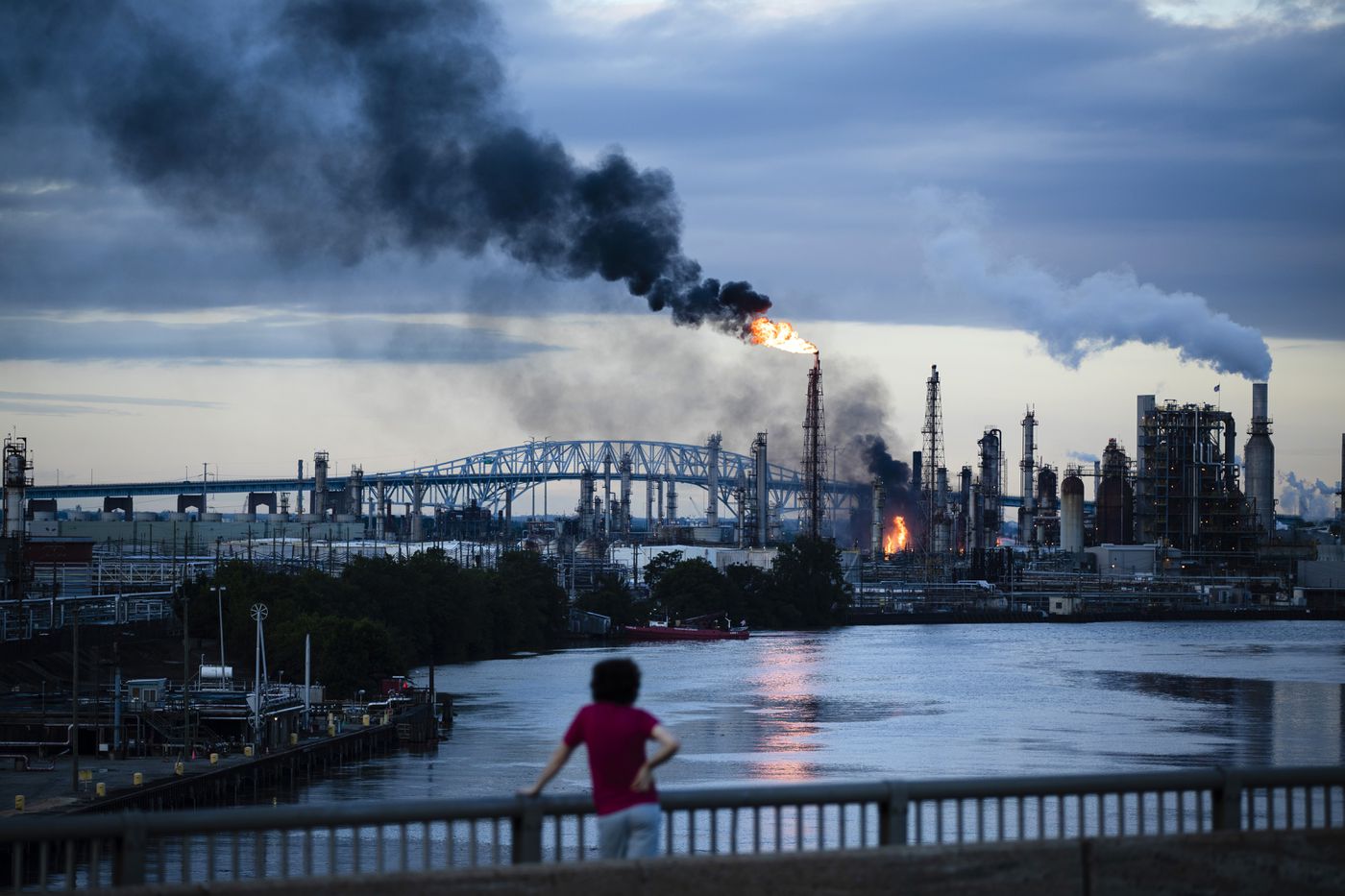 Make no mistake, Philadelphia dodged a bullet — no, make that a dirty bomb — last week. It’s remarkable that only five refinery workers suffered non-life-threatening injuries and that officials have found no toxic chemicals from the fire and the blasts in the nearby community. Even more alarming (as dissected expertly in this series of tweets from Philadelphia activist Gwen Snyder) is how close the blasts may have come to a release of a gas called hydrogen fluoride that can result from an acid that’s used to convert crude oil into fuels. That’s a lethal substance that experts have compared to those that once caused hundreds of deaths in the notorious 1984 accident in Bhopal, India.

Did you manage to sleep through your pre-dawn wake-up call from Mother Nature? Maybe you live in South Jersey and were too busy bailing out your basement from a six-inch assault of rain that occurred Wednesday night into Thursday, sending water streaming into homes, shutting down PATCO and generally wreaking havoc. It felt like a 15th-round knockout punch ending a spring that in the Philadelphia region has seen more than its share of extreme weather, including tornadoes.

Residents of towns like Westville said they’ve never seen so much water. “I used to be a volunteer firefighter here, and this street always flooded, but wow,” 73-year-old Sue Meade told the Inquirer. Wow, indeed. Experts say climate change — caused by humans burning up those fuels from refineries like the one in South Philly — has absolutely impacted 2019′s wild weather, as melting Arctic ice sheets have pushed the jet stream over North America further south. 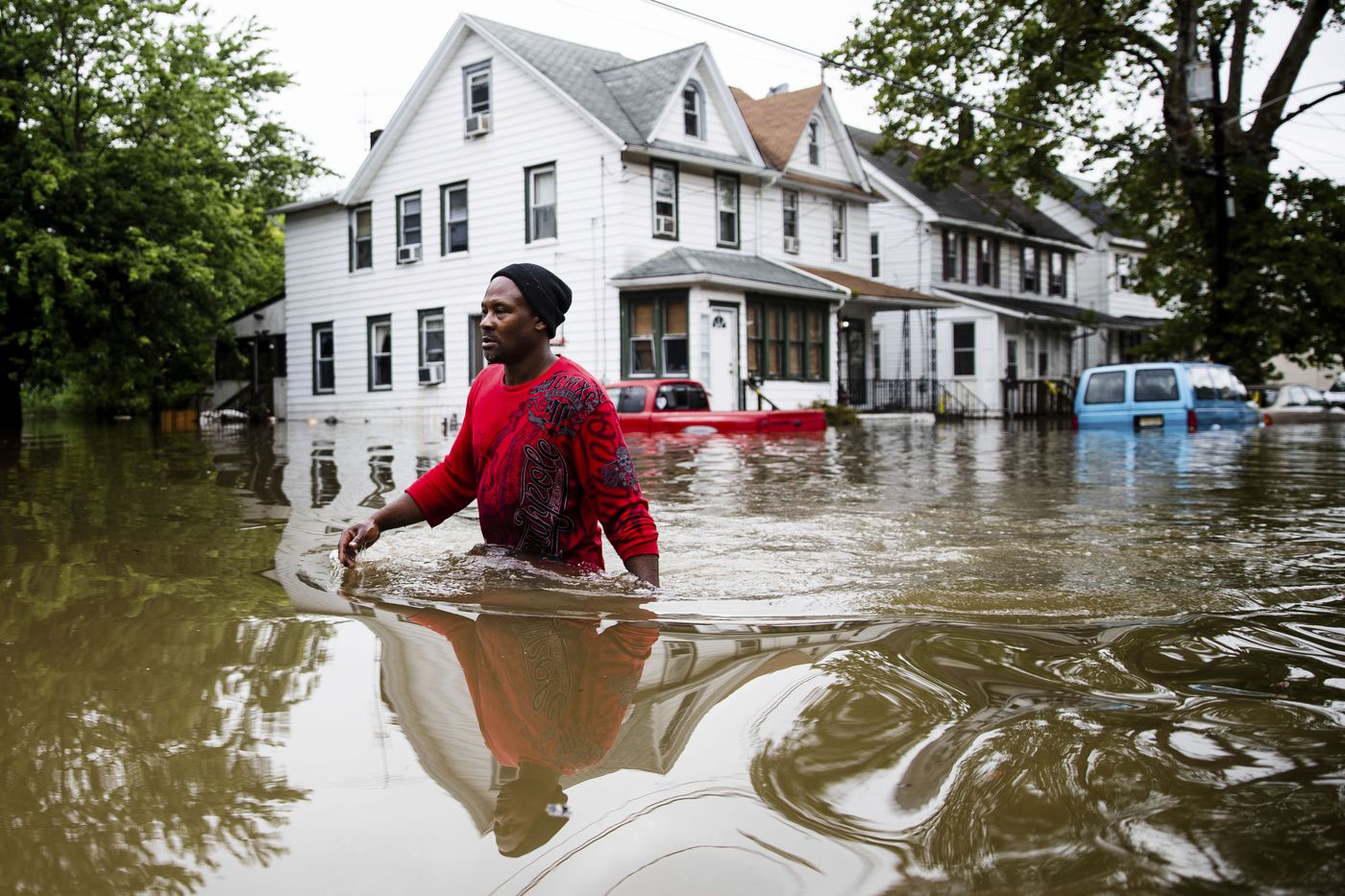 The ticking time bombs of weather and, well, fuel bombs came as activists across Pennsylvania are trying — with little luck so far — to convince Harrisburg that a generation of drilling for natural gas powered by fracking has caused irreparable harm to the health of residents, including kids. The recent report by the Pittsburgh Post-Gazette revealing 47 cases of childhood cancer — several of extremely rare varieties — near rural fracking sites has sparked a campaign to halt new drilling permits throughout the state until the Department of Health can investigate.

A letter calling for the ban was delivered last week to Gov. Wolf, who’s been all over the map on The Fossil Fuel Question since becoming Pennsylvania’s chief executive in 2015. In recent weeks, Wolf — to his credit — has backed a fracking ban in the Delaware River basin, but he also signed a bill to make Pennsylvania fracking “more competitive” and pushed a plan that would have boosted natural gas production by taxing it to pay for infrastructure.

Pennsylvania fosters that rare bird of pro-fossil-fuel liberal Democrats. Mayor Kenney was elected in 2015 promising to make Philadelphia an “energy hub” with jobs created in and around the refinery zone — you know, the one that blew up last week. Again, to his great credit, Kenney — en route to his second term — has backed away from that iteration of himself to now pursue a bold green energy policy. Which is why it’s baffling that Philadelphia City Council just voted overwhelmingly to sign off on a $60 million liquefied natural gas plant that a) will encourage more fracking and b) be placed right next to the South Philly refinery complex.

Explosions! Floods! Cancer! Enough! Pennsylvania’s 160-year-long love affair with fossil fuels is like a battleship — greased by millions of dollars in oil-drenched campaign contributions — that’s almost impossible to turn around. If June’s doom hasn’t convinced leaders in Harrisburg and here in City Hall that it’s time to start turning that giant wheel, nothing will. Our future demands that Pennsylvania and Philadelphia adopt a blanket policy of ending fossil fuel drilling and refining as quickly as possible — and then start taking consistent, principled actions to make that happen.

How residents in Pennsylvania are calling to a stop on fracking after 47 children are diagnosed or die from RARE cancer > https://t.co/jX8SUO6pyD

Joe Minott, the executive director of the Philadelphia-based Clean Air Council, said the state’s policies are especially baffling because Wolf seems to understand the seriousness of climate change even while endorsing what Minott called “a drill-baby-drill mentality" that includes a planned massive petrochemical complex in western Pennsylvania. “I’m nowhere near as bright as Governor Wolf but it doesn’t take a genius to see you can’t expand fossil fuel production and still meet the deadline” of a sharp reduction in fossil fuel production by 2030.

Here’s what would would constitute bold leadership after Philadelphia’s brush with another Bhopal or Chernobyl.

Friday’s near-miss gives Philadelphia’s leaders something that not everyone gets in life: A second chance to get it right. Let’s close the loop that started in 1859, and we’ll look back on June 21, 2019, not as a catastrophe but as the first day of Pennsylvania’s green and glorious new era.

This month’s action: Take the train! I promised at the start of 2019 that I’d write at least one column every month about climate change, and, to quote one of New Jersey’s many prophets, we’re halfway there! I also offer a monthly reminder that fighting climate change isn’t just for policy makers — that there are things that you, Ms. or Mr. Everyday Person, can do!

Get out of your car and take the train. On my last visit to Los Angeles, I did something crazy and survived without wheels, getting around for a couple of days on that city’s fairly newish and underrated mass transit system that includes bus rapid-transit, subways and light rail. If you can make it there, you can make it ... in Philly, with one of the best established transit systems in America. The less gasoline we need to produce, the less likely it will blow up on a hot Philadelphia night.

Will Bunch is a columnist for the Philadelphia Daily News and author of its popular blog Attytood.

Warning of 'Environmental Ruin and With It a Human Tragedy,' Report Details Triple Threat to Coral Reefs

Roy Eidelson
Bernie, Biden, and My Father
END_OF_DOCUMENT_TOKEN_TO_BE_REPLACED
Connect With Us

END_OF_DOCUMENT_TOKEN_TO_BE_REPLACED

As the crass GOP show trial begins - a legal charade deemed "the equivalent of impeachment jazz hands” - smack in the middle of the tawdry proceedings is Maine's ever-waffling rapist apologist Susan 'My Words Mean Nothing' Collins, who's been teasing she may want to hear from witnesses but oh dear, for now, just voted against them. Shocker. Andy Borowitz reports she went through the same “troubled and concerned" shtick over lunch. Then she got a roast beef sandwich - just like Mitch.
Read More...
END_OF_DOCUMENT_TOKEN_TO_BE_REPLACED