Where Does #MeToo Start?

Teaching methods frequently cast boys as active or dominant, and girls as passive or submissive — stereotypes that normalize the power dynamics that lead to abuse and harassment.

"There is little to be gained from using education practices that highlight gender differences, as opposed to emphasizing commonalities and meeting students where they are as individuals." (Photo: Tyler Olson/Shutterstock)

Reckoning with the prevalence of sexual harassment and gender-based violence in the wake of #MeToo has prompted many to reexamine the conditions that have allowed harassment and violence to flourish. One place to start is our public schools, where young people develop critical understandings about gender starting at an early age.

For over a decade, the ACLU has been raising alarms about teaching methods widely in use in public schools across the United States premised on the notion that there are fundamental, sex-based differences that determine how students learn and develop. Proponents of these methods frequently cast boys as active or dominant, and girls as passive or submissive — stereotypes that normalize the power dynamics that lead to abuse and harassment.

Consider the slide below, from a teacher training widely used by public schools in Volusia County, Florida, which literally divides students into pink and blue: 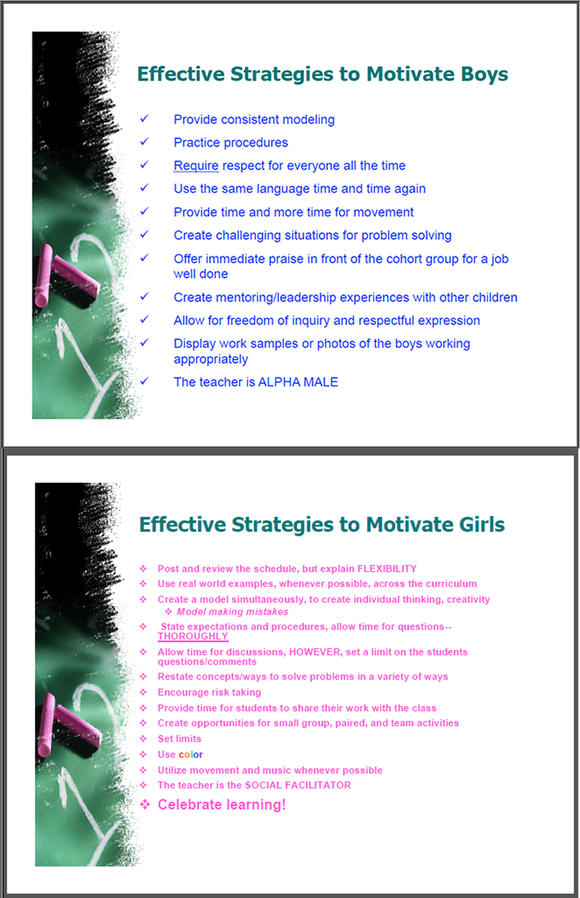 Or this poster, recently posted on the wall of an all-boys public school in Dallas: 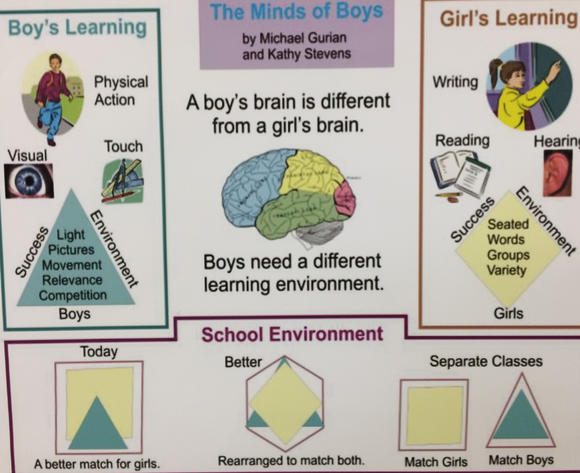 Michael Gurian, a popular author and chief proponent of this philosophy, has claimed: “Pursuit of power is a universal male trait. Pursuit of a comfortable environment is a universal female trait.” He suggests that boys who like to read or do not enjoy contact sports have a problem, and should be disciplined and made to spend time with “normal males” and play sports. He also recommends that boys be provided nerf bats to hit things in order to release physical aggression. Leonard Sax, another popular author, claims that teachers should discipline boys by asserting power over them or even spanking them, while they should discipline girls by appealing to their empathy. Both Sax and Gurian regularly provide teacher trainings in public schools, paid for at taxpayer expense, including recent mandatory trainings in Dallas, Texas and West Milford Township, New Jersey, to name just a few.

Educators often favor this approach because it matches perceptions of how “most” boys and girls behave, and because they are led to believe that separating boys from girls into different classes will eliminate distraction in the classroom and lead to better student performance outcomes. But scientific evidence tells a different story. Claims about differing male and female brains have been largely debunked: Brains are much more similar across sex than they are different, and what differences do exist don’t necessitate different teaching methods. What’s more, there is no valid evidence that the use of these teaching techniques is effective.

If we teach that boys are hardwired to be aggressive and dominating, and girls passive and submissive, how can we hold boys and men accountable when they perpetrate harassment and abuse? If we treat girls as too distracting to be educated in the same room as boys, what does that say about the relative value of girls’ and boys’ education, or their potential contributions to society? And if we presume male and female students can’t learn together in the same classrooms, how will they learn to coexist and treat each other with respect, whether in higher education or the workplace?

There is also the question of where this leaves students who don’t conform to gender expectations, including LGBTQ and non-binary students. Using sex as a proxy for students’ learning styles — or even to determine which classroom a student enters at school — erases their experience. Teaching that there is a “normal” way to be a boy or girl can exacerbate feelings of isolation, and increase instances of harassment and bullying, to which LGBTQ and non-binary students are already disproportionately subject.

Ultimately, there is little to be gained from using education practices that highlight gender differences, as opposed to emphasizing commonalities and meeting students where they are as individuals. Studies show that any practice that highlights differences between groups can increase biased beliefs about the other group. For example, separating students into a red t-shirt group and a blue t-shirt group leads to the red t-shirts making more generalizations about — and believing that they are superior to — the blue t-shirts, and vice versa. Research also shows that students who spend more time in single-sex groups develop more stereotyped views regarding gender roles.

To be sure, schools can and should be taking other measures to prevent violence and harassment at school, such as establishing clear complaint procedures and educating students on bystander prevention, and to ensure that teachers and administrators respond appropriately when it does occur. They should also institute comprehensive sexuality education programs that  equip students with the tools to help them maintain healthy relationships.

But #MeToo should also prompt us all, as parents, students, teachers, and community members, to reexamine entrenched assumptions about gender that are baked into the ways schools educate students. Only by eradicating sex stereotypes in education will students be equipped to collaborate, learn, and work as equals and ultimately realize the promise of equality as adults.

Investing In Nature Is Essential to Our Shared Future

Suspending Vaccine Patents Is the Leadership the World Needs to End This Pandemic
More in:
U.S.
,
Women, Education, #MeToo

END_OF_DOCUMENT_TOKEN_TO_BE_REPLACED

Stupidity reigns: A year after the deadly fact, the U.S. still has over 70,000 new COVID cases a day thanks to recalcitrant morons like Gym "What-sexual-assault?" Jordan, who spent a House hearing shrieking at Dr. Fauci about "lost liberty" and demanding, "When do Americans get their freedom back?" A weary Fauci: It's not "a freedom thing," it's "a public health thing." It finally took Maxine Waters to quash Jordan with, "Shut your mouth." Amen, auntie.
Read More...
END_OF_DOCUMENT_TOKEN_TO_BE_REPLACED