Philando Castile Should Still Be Alive

"I can’t get his picture out of my head, smiling from next to the breakfast cart, greeting my son. I shouldn’t have to live on memories. He didn’t need to die." (Photo: Tony Webster/flickr/cc)

Philando Castile should still be alive.

Mr. Phil (as he was known at school) worked at my son’s elementary school in the cafeteria. My son started pre-K this fall at the tender age of four. First thing he did every morning was walk in and get breakfast. He had never eaten in a cafeteria — he didn’t know the routine — and from day one Mr. Phil made him comfortable. I would often walk in with my son and had the pleasure of talking with Mr. Phil many mornings.

Within a week Mr. Phil knew my son’s name, despite the fact that there are hundreds of kids in the school. He would always make sure he actually took the food he was supposed to take, and he would often let him take an extra item if he was really hungry.

Mr. Phil’s life mattered. It mattered to his friends, to his family, and to the hundreds of students at J.J. Hill Elementary. It should matter to all of us as a society. It should matter that another Black man was senselessly killed at the hands of people who are supposed to protect us. 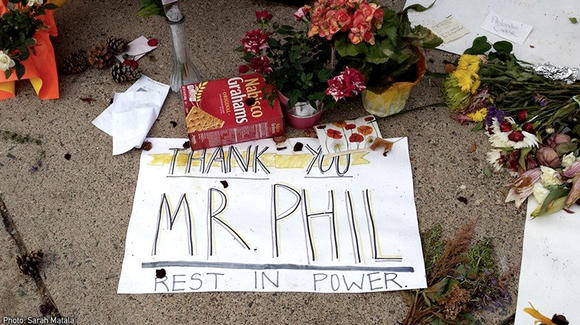 I can’t get his picture out of my head, smiling from next to the breakfast cart, greeting my son. I shouldn’t have to live on memories. He didn’t need to die.

My son is mixed; his dad his Black. He will learn that his skin color makes people unjustifiably scared of him. He might soon have to fear that his dad will be shot while he is in the backseat. Tonight, I will probably sneak in bed with him, cuddle up next to him, and just be with him — as I’ve done every night since Mr. Phil was stolen from us. But my husband and I can’t put off talking with him forever. We will talk with him and struggle to find the right words. I will probably start crying which will upset my son, but I will have to be there for him as he tries to make sense of all of this violence.

Mr. Phil’s life mattered. It mattered to his friends, to his family, and to the hundreds of students at J.J. Hill Elementary. It should matter to all of us as a society.

In many ways I feel incredibly lucky to be able to work at the ACLU and spend all of my working hours fighting for justice. The day after his shooting I could go to the protest for hours in the morning for work. I could take action through the ACLU, in our call for an independent investigation. I could spend my day writing these words and spend time processing my grief. While most people don’t do this for their profession, we can all contribute to the cause in our own way.

Mr. Phil was a good man. I’m not saying this to justify why he shouldn’t have been killed because I believe that even the people who the media try to paint as bad people don’t deserve to die unjustly at the hands of the police. I’m saying it because it is what I know about Mr. Phil.

Mr. Phil will be remembered by his friends and families and the thousands of students whose lives he positively impacted as a kind, caring, and thoughtful man. It is just terrible that all we have now are memories.

Jana was born and raised in North Dakota. She moved to Minnesota to attend Hamline University. She graduated in 2004 with a dual degree in Social Justice and French. She worked in Las Vegas and Saint Paul in the social service sector before coming to the ACLU-MN in June of 2006. She currently lives in Saint Paul with her husband and two children.

ACLU to Biden: Do Not 'Review' Drone Killing Program—End It Once and for All
More in:
U.S.
,
Police State, ACLU, Race, Black Lives Matter

Michael Winship
Same Old, Same Old from the Mouth That Roared
END_OF_DOCUMENT_TOKEN_TO_BE_REPLACED
Connect With Us

END_OF_DOCUMENT_TOKEN_TO_BE_REPLACED

Banksy's newest, a two-fer Oscar Wilde tribute and call for prison reform, shows a prisoner climbing down bedsheets ending in a typewriter from Reading Gaol, known for housing Wilde during his two years' hard labor for "gross indecency" - being gay. Video juxtaposes Banky creating it with TV artist Bob Ross burbling about freedom; both are haunted by Wilde's final searing poem about the cruelty and bleakness of life behind bars: "Something was dead in each of us/and what was dead was hope."
Read More...
END_OF_DOCUMENT_TOKEN_TO_BE_REPLACED