There are certain things in the climate fight that don’t make any money.

For example, when the NOAA mobilized an array of satellites and reconnaissance planes to tell us Hurricane Patricia was swirling massively and madly towards Mexico with persistent winds at over 200 mph — making it "the strongest hurricane" in recorded history, no one got lucky on the stock market.

Likewise, when the Mexican government set up over 1,200 shelters and sent pickup trucks into the streets with loudspeakers ordering evacuations, the focus was on saving lives, not creating capitol.

And that’s why it’s incredibly alarming that only about 3% of the funds wealthy countries have so far pledged to help developing countries deal with more climate change-spiked hurricanes, draughts, rising seas and so on are set to come in the form of free public grants. That’s 3% for publicly funding things like loudspeakers, seawalls, famine alert systems, and other adaptation projects and emergency infrastructure. 3% for building buffers on a broken planet that don’t exactly make big profits.

At the Copenhagen climate summit in 2009, world leaders pledged to raise 100 billion dollars a year by 2020 to help poorer countries cut carbon and prepare for the hurt of an already carbon-loaded world.

It’s important to remember that the $100 billion target is a conservative target to start with. By 2030, the absence of significant global action would cost 20 of the most vulnerable countries like Tuvalu and Bangladesh over $400 billion per year in economic losses, according to the Philippines Finance Minister Cesar Purisima.

That said, as we head to Paris, all eyes are on the already agreed upon $100 billion target - as time is running out to mobilize in favor of it.

The good news is according to an Oct 7th report by the Organisation for Economic Co-operation and Development (OECD),  an international NGO led by 34 mostly developed countries, $52.2 billion a year was mobilized in 2013 and $61.8 was mobilized in 2014.

Newspapers around the world promoted the OECD’s $62 billion global tally for 2014 — a number that almost sounds like you could reach the $100 billion target by 2020. But Oxfam took a hard look at the report’s numbers and found that for 2013, only $1.5 of that year’s $52 billion (3%) was marked for public grants for climate-focused adaptation projects.

While not all contribution data is available for 2014, Oxfam’s estimation for public grant funded climate adaptation for 2014 is only marginally better ($2 billion of $62 billion). 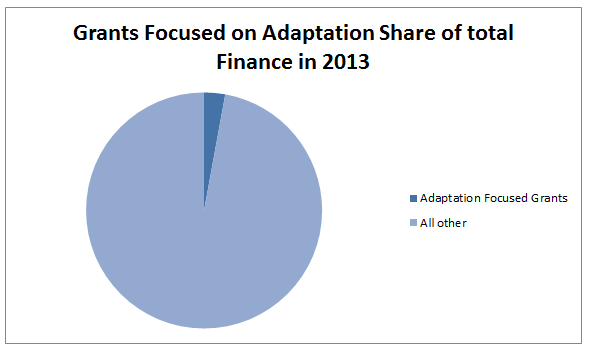 According to the analysis of Annaka Peterson Carvalho, a senior program officer at Oxfam International, the bulk of the remaining funding pool is "private finance and loans (both concessional and non-concessional) which countries will need to pay back." In the case of loans, even concessional (low-interest, government-backed) loans, your seawall better be able to pay for itself, as well as earn a sprinkle of interest.

Developed countries are basically throwing everything they can at the $100 billion target, and the Copenhagen Accord’s allowance for "a wide variety of sources, public and private, bilateral and multilateral, including alternative sources of finance" gives them the green light to do so.

Carvalho points out that private finance has a key role to play in funding things like clean energy projects, but less so for basic adaptation.

As one might expect, the relative dearth of public grants for adaptation has caused a degree of outrage from vulnerable countries. Poor countries are essentially maxed out just coping with a tougher world, and feel (rightfully so) that countries who have historically polluted the most should owe a debt, not the other way around.

Two days after the OECD report came out, Friends of the Earth published an open letter signed by 112 groups, demanding that "Only public grants – or the grant equivalent of loans, guarantees and other financial instruments – should count as part of the $100 billion or any future climate finance targets."

The letter continues: "Climate finance must not add to the debt burden of fragile and highly indebted developing country economies...Private investment cannot be a replacement for direct public support, especially for adaptation."

Karen Orenstein, senior international policy analyst with FOE, warns that "creative accounting and number crunching in no way translates into meeting the needs of people in India or Bolivia or Madagascar as they deal with climate-caused food shortages, floods, droughts, etc."

It’s unclear yet how justice will be served in Paris—the international spotlight means there’s a chance FOE’s demands for a 100% grant-financed climate finance package may get some traction. And if not, Oxfam has previously gone to bat for "a minimum floor of at least 50% of public finance" for adaptation projects via the Green Climate Fund, a global mechanism for funneling a significant portion of the $100 billion.

Orenstein reminded this writer that "there will be a very, very loud call for climate justice in Paris – both within the halls of the official negotiations and on the streets. An essential component of this call is for the transfer of funds from the North to the South (from developed to developing countries)."

The North-to-South transfer of funds mentioned by Orenstein is a reference to the related concepts of "climate debt" and "climate reparations." The idea is that since the more-developed, wealthier countries are largely responsible for choking the atmosphere with hundreds of billions of metric tons of carbon, they owe a debt to the less-developed, more vulnerable countries, to help them build their economy cleanly, and prepare for the coming climate nightmares.

Ambassador Joyce Mxakato-Diseko, the South African ambassador who chairs the G77, said last week in Bonn that climate finance is "a matter of life or death… and we are dead serious."

As the negotiations heat up, it’s important to remember the lesson from Hurricane Patricia. Lives saved are real, powerful, and priceless. They shouldn’t come with interest.

Joe Solomon is a co-founder of GreenMemes.org, and is the former social media coordinator for 350.org and Energy Action Coalition. Joe is the co-editor of "The Most Amazing Online Organizing Guide Ever." He currently lives in West Virginia.

After 'Incredible First Steps' on KXL and Paris, Biden Urged to 'Go Further' on Climate

Re-entering the Paris Climate Agreement Is Just Step One to Address the Climate Emergency: Frontline Women Must Lead the Way
More in:
World, Climate
,
Paris Agreement, Peoples Climate, Bolivia, Friends of the Earth

Matthew Rothschild
After Four Brutal Years, Biden's Inaugural Was a Healing Affair...
END_OF_DOCUMENT_TOKEN_TO_BE_REPLACED
Connect With Us

END_OF_DOCUMENT_TOKEN_TO_BE_REPLACED

The veterans of the Great Capitol Insurrection, it seems, are not faring well. Scores of rioters have been arrested, many moronically incriminating themselves en route; investigations are finding the Trump campaign supplied untold millions to the pre-riot rally, often via shell companies and dark money that could constitute illegal money laundering; and weary Americans breathlessly await the spectacle of a Trump impeachment trial for what Chuck Schumer just called inciting "the erection."
Read More...
END_OF_DOCUMENT_TOKEN_TO_BE_REPLACED