Last week, the principle governing body of the American Psychological Association formally honored one of its members, Jean Maria Arrigo, for blowing the whistle on the association’s collusion in the Bush administration’s torture programs.

The distinction, given during the APA’s annual convention in Toronto last week, reads:

"We honor you for your resolute commitment and tenacity in advocating for peace, human rights, and ethical behavior. We honor you for your unwavering courage in opposing torture, despite efforts to discredit, isolate, and shun you, in orchestrated movements by those in positions of power."

The honor comes on the heels of a scathing report published on the APA’s involvement in the Bush-era torture programs. That report details a vicious smear campaign launched against Arrigo after she spoke out against the APA enabling torture and in defense of human rights.

That honor has been a long time coming.

Arrigo was appointed in 2005 by the board of the APA as a member of an internal panel known as the Task Force on Psychological Ethics and National Security. The formation of the task force was prompted by a by a front-page New York Times article discussing psychologists’ roles in physically and psychologically coercive interrogations at Guantánamo and in other U.S.-run detention facilities in Iraq. Tasked with issuing ethical guidance for psychologists in interrogation settings, the panel, working in close collaboration with the Department of Defense, gave a greenlight to psychologist involvement in national security interrogations. 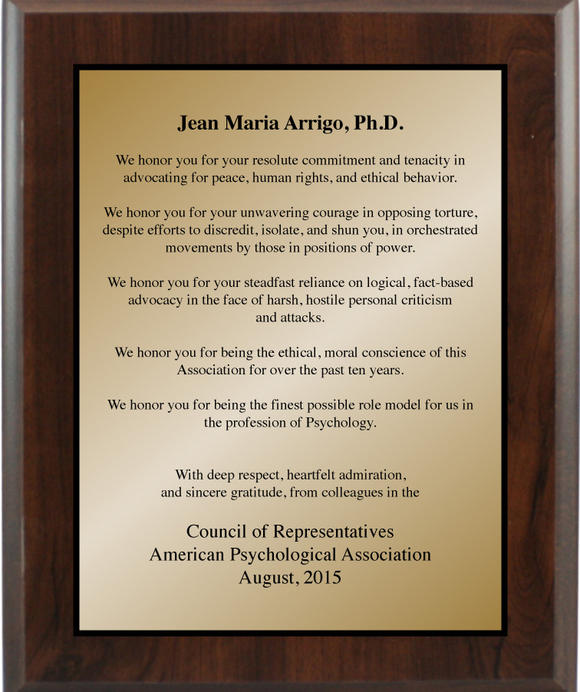 Arrigo raised concerns and objections both during panel meetings and repeatedly thereafter, sounding the alarm over the panel’s close ties to the military and its failure to ensure psychologists wouldn’t be facilitating torture. The so-called Hoffman Report confirms Arrigo’s worst fears, providing extensive detail on the extent of the collusion between the APA and the military and the lengths that APA officials went to in order to allow psychologists to participate in the U.S. torture programs.

The 542-page report documents the efforts senior APA officials took to cover up their unlawful actions, including maligning and personally attacking Arrigo’s character when she voiced her concerns about APA’s facilitation of torture and took them public. In one example in 2007, APA board member Gerald Koocher publicly dismissed Arrigo’s concerns, stating that they were influenced by her “personal biases,” “troubled upbringing,” and the purported suicide of her father — who was alive when Koocher wrote the letter.

The APA’s recognition of Arrigo’s principled stand against torture is welcome.  (The association’s also decided last week to ban its members from participating in any national security interrogations.) But this apology, on behalf of the leadership of a professional organization, stands in stark contrast to the U.S. government’s failure to honor the public servants who said no to torture in the name of human rights and our laws and values. These men and woman — from within the government, the military, and the CIA — stood up against their own powerful leaders who were bent on leading the country astray. Their roles in exposing torture and their valiant efforts to stop it have yet to be acknowledged. To date, only the torturers — not the officials who opposed torture — have been honored.

This, of course, is to say nothing of what is owed to the hundreds of men and women who were victimized when the U.S. government chose to torture them in military prisons and CIA “black sites” around the world. It is these victims and survivors, more than anyone, who deserve not only an apology, but a full explanation of what was done to them and compensation so that they and their families can obtain some measure of rehabilitation.

Only then can we as a nation ensure that history doesn’t repeat itself.

Steven Watt is a Senior Staff Attorney with the ACLU’s Human Rights Program.

Assange’s US Extradition Hearing Opens Monday: Fight for the Free Press Is Now On

Letting the Pentagon Loose With Your Tax Dollars

Mitch Stoltz
The Government’s Antitrust Suit Against Google: Go Big and Do It Right

Ralph Nader
To Democratic Voters – Up Your Demands; To Trump Voters – See How He Didn’t Deliver for You

END_OF_DOCUMENT_TOKEN_TO_BE_REPLACED

As thousands pay tribute to Ruth Bader Ginsburg, the first woman, and Jew, to lie in state, we seek to find light where we can amidst the grief, dread, fury, rubble. There's resolve to Block Barrett. There's hard truth: "When the people speak, the Court listens," and they'll only save us if we fight for it. And there's the kids, heartbreaking and uplifting and reverential in their RBG collars, who with their parents came to honor " what America should be," and who give us hope.
Read More...
END_OF_DOCUMENT_TOKEN_TO_BE_REPLACED