SUBSCRIBE DONATE
Published on
Monday, February 17, 2014
by
The Guardian

President's Day: Another Reminder How Messed Up US Holiday Policies Are

About one in four working Americans get no paid vacation or holidays. None.

US government workers, teachers, postal service employees, and (most) bank tellers turned off their alarms this morning for President's Day. There were also noticeably fewer people on the Big Apple subways since New York stock exchange isn't trading today.

If you get today off, you're lucky. If you get it off with pay, you're even more fortunate.

Some question why we have this holiday. President's Day seems like little more than an excuse for car and retail sales. Other than brush up on a bit of US history, which few people do, there's nothing you should be doing today. There are no BBQs and fireworks like Independence Day or solemn events as on Memorial and Veterans days or the "day of service and action" that Martin Luther King Day has become. Today was supposed to honor America's first president, George Washington, but even that has eroded away. Most people now call it President's Day and view it as a celebration of all American presidents (or, at least, the more popular ones from the past).

This holiday has been in existence since 1879. It used to be a fixed date (22 February), but was changed to designate the third Monday of every February as Washington's Birthday when people figured out that three-day weekends are ideal. As Congress wrote in 1968 when it made the date change, the goal was to ""bring substantial benefits to both the spiritual and economic life of the nation". Apparently, Congress felt only government workers needed today off to achieve those benefits.

As the nation divides today between those with out-of-office messages and those still going to work, consider this: about one in four working Americans get no paid vacation or holidays (pdf). None.

America is only developed nation that has no legal requirement for any paid days off. The next worst off workers are in Japan and Canada, which mandate at least 10 and 19 paid days off a year, respectively. European nations ensure at least 20 days with many giving 25+.

You can see a full country-by-country analysis below from the Center for Economic and Policy Research, a think tank which dubbed the US the "No-Vacation Nation". Australia and New Zealand also look generous with 28 and 30 days, respectively. 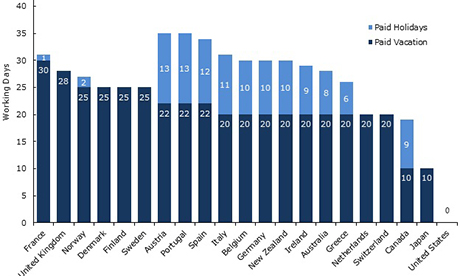 Of course, America's work ethic is so well known, it's often mocked. Have you seen the latest commercial automaker Cadillac is running for its 2014 ELR coupe? It opens with a clearly rich man walking by his pool and musing, "Why do we work so hard? For what? For this … for stuff?" The ad goes on:

Other countries, they work, they stroll home. They stop by the café. They take August off. OFF. Why aren't you like that? Why aren't we like that? … Because we're crazy driven, hard workin' believers, that's why, he says as he high-fives his kids.

After several more American pride comments, we follow the dad out to the driveway where he tells the camera:

It's pretty simple: you work hard, you create your own luck and you gotta believe anything is possible. … As for all the stuff, that's the upside of only taking two weeks off in August. N'est-ce pas?

Then the American father figure drives off with a big smile on his face in his Cadillac.

The ad has all the trappings of a "do your work with pride for America" campaign, but I couldn't get beyond the last line: two weeks off in August. That's certainly not a given. It's true that the average worker in the US gets 12 to 13 paid days off a year (plus a few paid holidays on top of that), but some are discouraged from taking two weeks at once. Then there's the sadder scenario: nearly a quarter of American workers don't get one week, let alone two, of paid vacation time.

As you might expect, those who don't get any paid time off in the US are more likely to be low-income and part-time workers. According to an analysis of government data by Center for Economic and Policy Research, half of low-wage workers get no paid holidays, let alone vacations time. Want to take President's Day or even Christmas off? Even if an employer allows it, plenty of US workers won't get paid for the time they don't work.

It's another example of the dividing line between the haves and have nots in America. There are those who get today off – with pay – who have both the time and money to go out and buy new clothes, gadgets and cars. And then there are those who have to work today (and most other holidays), often serving those on vacation.

Heather Long is assistant editor for The Guardian's "Comment is Free US."

The Pain of Puerto Ricans: A Profit Source for Creditors

Labeled 'No Vacation Nation,' US Still Lags Behind Other Wealthy Countries in Giving Workers Paid Holidays

Why Are House Democrats Afraid to Wield Their Subpoena Power?

END_OF_DOCUMENT_TOKEN_TO_BE_REPLACED

Goddamn. We mourn the gut-punching loss of singular songwriter, storyteller, good ole boy and lovely human being John Prine, whose deep, wry, bittersweet songs of real life helped so many get through so much. The world feels emptier without his plain-spoken wit and grace and gift of being the saddest and funniest guy in the room by "saying the thing without ever saying the thing." A fan: "Thanks for being so much more than we could ever deserve." Yeah this old man is goin' to town.
Read More...
END_OF_DOCUMENT_TOKEN_TO_BE_REPLACED