SUBSCRIBE DONATE
Published on
Tuesday, September 17, 2013
by
The Guardian/UK

The fifth Intergovernmental Panel on Climate Change (IPCC) report is due out on September 27th, and is expected to reaffirm with growing confidence that humans are driving global warming and climate change. In anticipation of the widespread news coverage of this esteemed report, climate contrarians appear to be in damage control mode, trying to build up skeptical spin in media climate stories. Just in the past week we've seen:

Interestingly, these pieces spanned nearly the full spectrum of the 5 stages of global warming denial.

Often when people are first faced with an inconvenient problem, the immediate reaction involves denying its existence. For a long time climate contrarians denied that the planet was warming. Usually this involves disputing the accuracy of the surface temperature record, given that the data clearly indicate rapid warming.

In the 1990s, Christy and Spencer created a data set of lower atmosphere temperatures using measurements from satellite instruments. These initially seemed to indicate that the atmosphere was not warming, leading Christy, Spencer, and their fellow contrarians to declare that the problem didn't exist. Unfortunately, it turned out that their data set contained several biases that added an artificial cooling trend, and once those were corrected, it was revealed that the lower atmosphere was warming at a rate consistent with surface temperature measurements.

Most climate contrarians have come to accept that the planet has warmed significantly. Unfortunately many have regressed back into Stage 1 denial through the new myth that global warming magically stopped 15 years ago (most recently exemplified by David Rose in the Mail on Sunday). The error in that argument involves ignoring about 98 percent of the warming of the planet, most of which goes into heating the oceans. When we account for all of the data, global warming actually appears to be accelerating. 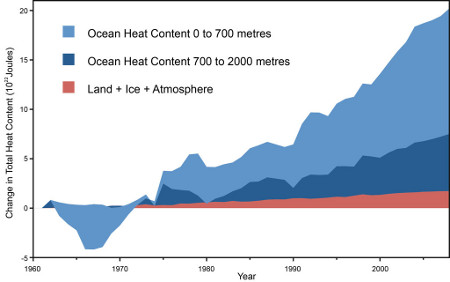 David Rose also doubled-down on his Arctic sea ice decline denial this weekend, suggesting melts in the 1920s were just as large as today's. Sorry David, the data debunk your denial again. 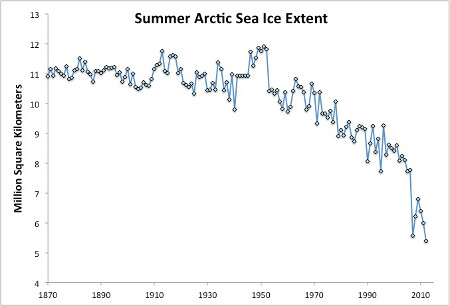 Stage 2: Deny We're the Cause

Once people move beyond denying that the problem exists, they often move to the next stage, denying that we're responsible. John Christy and Roy Spencer took this approach by disputing the accuracy of global climate models in The Daily Mail and The Christian Post, respectively. Spencer was quite explicit about this:

...we deny "that most [current climate change] is human-caused, and that it is a threat to future generations that must be addressed by the global community."

Christy and Spencer made their case by comparing the outputs of 73 climate models to satellite temperature measurements, and showing that the models seemed to predict more warming than has been observed. But the comparison was not of surface temperatures, or of the lowermost layer of the atmosphere, or even any measurement global average temperatures. They specifically looked at measurements of the temperature of the middle troposphere (TMT) in the tropics.

There's certainly nothing wrong with examining this particular subset of temperature data, but it's a bit of an odd choice on the face of it. The real problem lies in the fact that satellite measurements of TMT are highly uncertain. In fact, estimates of the TMT trend by different scientific groups vary wildly, despite using the same raw satellite data.

Another problem is that the stratosphere (the layer of the atmosphere above the troposphere) is cooling – an expected consequence of the increased greenhouse effect. But some of the cooling stratosphere bleeds into the TMT data, leading to another cool bias. While there is a discrepancy between model simulations and measurements of tropical troposphere temperatures, it's not clear how much (if any) is due to the models being wrong, and how much is due to errors in the measurements. As a U.S. Climate Change Science Program report co-authored by John Christy concluded,

"This difference between models and observations may arise from errors that are common to all models, from errors in the observational data sets, or from a combination of these factors. The second explanation is favored, but the issue is still open."

However, in mainstream media interviews and editorials, Christy and Spencer always fail to mention the possibility that the problem could lie more in the measurements than the models, which frankly is intellectually dishonest. Additionally, climate models have done very well in projecting long-term global surface temperature changes.

In Murdoch's The Australian, Andrew Montford took a different approach to deny that we're the cause of the problem, attacking the expert consensus on human-caused global warming. Specifically he attacked the Cook et al. (2013) study finding 97 percent consensus on this question in the peer-reviewed scientific literature.

In order to deny the consensus, Montford employed the Climategate strategy, using material stolen during a hacking of the private Skeptical Science discussion forum. He then pulled quotes out of context to claim the study was "a public relations exercise," because we discussed how to effectively communicate our consensus results. In reality, the comments Montford used to support this argument were made after we had preliminary results reviewing nearly 14,000 peer-reviewed abstracts that found only 24 rejecting the human-caused global warming consensus.

Montford's article demonstrates the inherent dangers in quoting illegally obtained private correspondence. First, there is the obvious ethical issue of republishing private correspondence obtained through an illegal act. Second, using isolated quotes extracted from private conversations runs the risk of taking comments out of context and misrepresenting the facts.

In any case, we have set up a public ratings system so that anybody can read and rate the scientific abstracts. If you don't believe the vast body of evidence of an expert consensus on human-caused global warming, test it for yourself. Moreover, the scientist ratings of their own papers – independent of our abstract ratings – also resulted in a 97 percent consensus.

Stage 3: Deny It's a Problem

Once they've progressed through the first two stages and admitted global warming is happening and human-caused, contrarians generally move on to Stage 3, denying it's a problem. Lomborg and Ridley did their best Tony the Tiger impressions in The Washington Post and Murdoch's Wall Street Journal, respectively, arguing that global warming is 'Grrrrreat!' (or at least nothing to worry about).

I've previously discussed why this argument is a complete risk management failure. When faced with a potentially catastrophic outcome for something as important as the global climate, it's a no-brainer to take action to make sure we avoid that possible outcome. Moreover, Lomborg's and Ridley's arguments are based on cherry picking data. For example, Lomborg talks about how droughts have not worsened in the United States, according to the IPCC, but fails to mention that the IPCC predicts that US droughts will intensify over the next century.

In his editorial, Ridley takes a rosy view about the impact of climate change on crop yields that is not supported by the scientific research. He argues that climate impacts won't be bad in a middle-of-the-road emissions scenario, but as Climate Progress reports, the scientist on whose work Ridley based this argument previously explained,

"In his article, Mr. Ridley is just plain wrong about future global warming."

Moreover, by painting an unjustifiably rosy picture and thus misleading the public, he's helping to ensure that we'll blow past that middling greenhouse gas emissions scenario (which requires significant emissions reductions efforts) and commit ourselves to much worse climate change consequences.

Stage 4: Deny We can Solve It

In his editorial, Roy Spencer bounced between the second and fourth stages of global warming denial, also claiming that solving the problem is too expensive and will hurt the poor. In reality the opposite is true.

Spencer specifically attacked renewable energy like wind power as being too expensive. In reality, wind power is already cheaper than coal, even without considering the added climate damage costs from coal carbon emissions. When including those very real costs, solar power is also already cheaper than coal. Additionally, the poorest countries are generally the most vulnerable to climate change. Listening to Spencer and continuing to cause rapid climate change is what will really hurt the poor.

Stage 5 global warming denial involves arguing that it's too late to solve the problem, so we shouldn't bother trying (though few climate contrarians have reached this level). Unfortunately this stage can be self-fulfilling. If we wait too long to address the problem, we may end up committing ourselves to catastrophic climate change.

The good news is that we still have time to avoid a catastrophic outcome. The more emissions reductions we can achieve, the less the impacts of climate change will be. The challenge lies in achieving those greenhouse gas emissions reductions when Rupert Murdoch's media empire and other news outlets are spreading climate misinformation and denial.

Reminder to Congress: The Coal Industry Trade Association Doesn't Give a Damn About Its Workers
More in:
Climate, Coal, Arctic

END_OF_DOCUMENT_TOKEN_TO_BE_REPLACED

Protests continue against Louisville's grotesque decision to deny justice to Breonna Taylor but afford it to her neighbors' walls in an indictment that, after months of demands to Say Her Name, literally doesn't mention her: " It’s as if she was never there." In a dark twist, her killers were acquitted on the same date as Emmett Till's; his prescient mother had warned, if he didn't get justice, "It won't be safe for a Negro to walk the streets anywhere in America" - or, it turns out, sleep.
Read More...
END_OF_DOCUMENT_TOKEN_TO_BE_REPLACED