SUBSCRIBE DONATE
Published on
Tuesday, May 28, 2013
by
The Guardian

The Skeptical Science survey finding 97% expert consensus on human-caused global warming has drawn an incredible amount of media attention. Hundreds of media stories documented our survey and results. Lead author John Cook and I participated in a number of interviews to discuss the paper, including on Al Jazeera, CNN, and ABC. President Obama even Tweeted about our results to his 31 million followers.

The story has been so popular mainly because our results present a simple but critical message. There is a wide gap between the public awareness and the reality of the expert consensus on human-caused global warming. 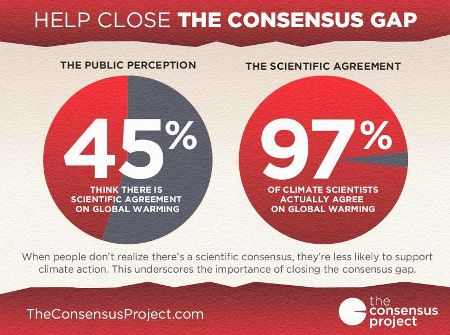 Additionally, as John Cook has discussed, research has shown that perception of consensus is linked to support for climate policy. This is true along most of the ideological spectrum – when people are aware of the expert consensus on human-caused global warming, they are more likely to support taking action to solve the problem.

Opponents of climate action have been aware of the powerful influence of the scientific consensus for decades. As far back as 1991, Western Fuels Association launched a $510,000 campaign to "reposition global warming as theory (not fact)" in the public perception. A memo from communications strategist Frank Luntz leaked in 2002 advised Republicans "to continue to make the lack of scientific certainty a primary issue in the debate."

Thus although our results were straightforward and consistent with previous research, we were not surprised when they met with resistance from certain groups, and anticipated the critiques with an FAQ. However, in reviewing the various criticisms of our paper, we noticed some common threads amongst them. A 2009 paper published in the European Journal of Public Health by Pascal Diethelm and Martin McKee discussed five characteristics common to scientific denialism:

For example, the author of one blog post contacted a handful of scientists whose papers were included in our survey and claimed that we had 'falsely classified' their papers. Climate economist Richard Tol echoed the criticism of our paper in this blog post. This particular criticism manages to check off three of the five characteristics of scientific denialism.

Specifically contacting these few scientists is a classic example of cherry picking. Our survey received responses from 1,200 climate researchers; the author of this post carefully selected a few of them who all just happen to be well-known climate 'skeptics'. It's also a variant of the fake expert characteristic, as John Cook explained in his textbook with G. Thomas Farmer, Climate Change Science: A Modern Synthesis.

"A variation of the Fake Expert strategy is to take the handful of remaining dissenting climate scientists and magnify their voices to give the impression of more significant disagreement then there actually is."

The handful scientists contacted for this blog post are among the less than 3% of climate researchers who dispute human-caused global warming. As a result, the voices of this small minority of 'skeptics' are magnified.

Third, this blog post argument is a misrepresentation of our study. The Skeptical Science team categorized the papers based solely on their abstracts, whereas the scientists were asked about the contents of their full papers. We invited the scientific authors to categorize their own papers, so if they responded, their 'correct' classifications of the full papers are included in our database. As illustrated in the graphic below, we found the same 97% consensus in both the abstracts-only and author self-rating methods.

Another characteristic of movements that deny a consensus involves impossible expectations. The tobacco industry perfected this approach in the 1970s, demanding ever-more stringent levels of proof that smoking caused cancer in order to delay government regulation of their products. This technique of impossible expectations was illustrated in another blog post claiming that only papers which quantify the human contribution to global warming count as endorsing the consensus. Most climate-related research doesn't quantify how much global warming humans are causing, especially in the abstract; there's simply no reason to.

We didn't expect scientists to go into nitty gritty detail about settled science in the valuable real estate of the abstract (the short summary at the start of the paper). However, we did expect to see it more often in the full paper, and that's exactly what we observed. When scientists were asked to rate the level of endorsement of their own papers, in the 237 papers that actually specified the proportion of human-caused global warming, over 96% agreed that humans have caused more than half of the recent global warming.

In yet another blog post, Christopher Monckton, whom my colleague John Abraham exposed as habitually misrepresenting climate scientists' research, has also misrepresented our results. Monckton compared apples to oranges by looking at previous consensus studies in an effort to argue that our results show a 'collapsing' consensus. On the contrary, using a consistent apples-to-apples comparison over a two-decade span, we showed that the consensus on human-caused global warming is growing. 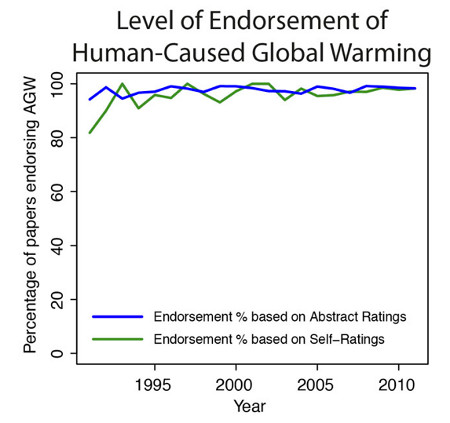 In recent years, fewer papers have taken a position on the cause of global warming in the abstract. This was predicted by Naomi Oreskes in 2007, who noted that scientists will move on to focus on questions that are not settled. Some blogs advanced a related logical fallacy by claiming that this shows 'an increase in uncertainty.' However, if uncertainty over the cause of global warming were increasing, we would expect to see the percentage of papers rejecting or minimizing human-caused global warming increasing. On the contrary, the percentage of rejecting studies is declining as well. That scientists feel the issue is settled science actually suggests there is more certainty about the causes of global warming.

Finally, a conspiracy theory has been proposed, suggesting that the consensus is simply a result of scientific journals refusing to publish papers that reject human-caused global warming. Our analysis included results from 1,980 journals all around the world. For all of these nearly two thousand international scientific journals to block 'skeptic' research would involve a massive conspiracy indeed.

Due to the importance of our results, we fully expect the resistance to continue, and we fully expect those who resist our findings to continue to exhibit the five characteristics of scientific denialism. However, we have used two independent methods and confirmed the same 97% consensus as in previous studies. That overwhelming agreement on human-caused global warming manifests in so many independent ways indicates that the scientific consensus is a robust reality.

Everyone's Gone to the Moon…

Because the Climate Crisis Is the 'Number One Priority,' Says Harry Reid, Senate Democrats Must Kill Filibuster

AOC Derides NYT Columnist Bret Stephens for Whining About Twitter Bedbug Jibes: 'My Own Friends Roast Me Harder Than That'

Million Belay, Timothy A. Wise
Africa at the Crossroads: Time to Abandon Failing Green Revolution
END_OF_DOCUMENT_TOKEN_TO_BE_REPLACED
Connect With Us

END_OF_DOCUMENT_TOKEN_TO_BE_REPLACED

Protests continue against Louisville's grotesque decision to deny justice to Breonna Taylor but afford it to her neighbors' walls in an indictment that, after months of demands to Say Her Name, literally doesn't mention her: " It’s as if she was never there." In a dark twist, her killers were acquitted on the same date as Emmett Till's; his prescient mother had warned, if he didn't get justice, "It won't be safe for a Negro to walk the streets anywhere in America" - or, it turns out, sleep.
Read More...
END_OF_DOCUMENT_TOKEN_TO_BE_REPLACED