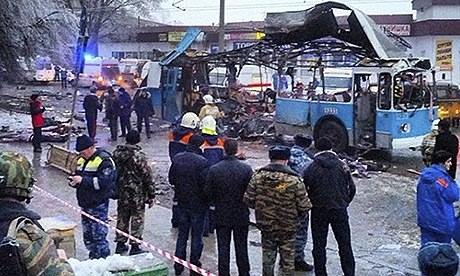 The second deadly bombing in two days has killed more than a dozen people in the Russian city of Volgagrad on Monday.

The bombing, which took place on a trolleybus in the city, takes places after one on Sunday at a train station in the same city which killed at least seventeen people.

Monday's attack becomes the third bombing in the city in as many months and is sparking heated worries about the violent situation in Russia ahead of the Winter Olympic Games scheduled to begin in the city of Sochi just weeks from now.

Though no group has yet claimed responsibility for the bombing the widely held speculation is that the attacks are the work of Islamist separatists from the Caucacus region, including Dagestan and Chechnya, where military factions have vowed to target the Olympics as part of their continued fight against the government of President Vladimir Putin.

The Guardian reports on Monday's boming:

The authorities initially said 15 people were dead, but a statement from local authorities subsequently put the toll at 14. Dozens were reported injured, including a one-year-old child who was in a critical condition.

The blast ripped apart the trolleybus, leaving a disfigured carcass without the roof and walls.

It is the third bombing attack in Volgograd in three months, with most security experts linking the wave of attacks to the pledge by the Chechen jihadist leader Doku Umarov to disrupt the Olympic Games in Sochi, which start in six weeks' time.

Investigators said they believed a male suicide bomber set off the blast, a day after a similar attack killed at least 17 in the main rail station of a city that serves as a gateway to the southern wedge of Russian territory bounded by the Black and Caspian Seas and the Caucasus mountains.

A Reuters journalist saw the blue and white trolleybus - a bus powered by overhead electric cables - reduced to a twisted, gutted carcass, its roof blown off and bodies and debris strewn across the street. Windows in nearby apartments were blown out by the explosion, which investigators called a "terrorist act".

"For the second day, we are dying. It's a nightmare," a woman near the scene said, her voice trembling as she choked back tears. "What are we supposed to do, just walk now?"

The bomb used was packed with "identical" shrapnel to that in the rail station, indicating they may have been made in the same place and supporting suspicions the bombings were linked, said Vladimir Markin, a spokesman for the investigators.

Health Ministry spokesman Oleg Salagai said 14 people were killed and 28 wounded in the bombing on Monday.

"There was smoke and people were lying in the street," said Olga, who works nearby. "The driver was thrown a long way. She was alive and moaning ... Her hands and clothes were bloody,"

There was no immediate claim of responsibility.

And The New York Times reports on the unprecedented level of security already in place ahead of the Sochi games:

The autonomous republics of the North Caucasus, including Dagestan and Chechnya, have been roiled for nearly two decades by armed insurgencies — complex, ever-shifting conflicts that the International Crisis Group recently called “the most violent in Europe today.” The violence has claimed hundreds of lives this year, prompting the Russian authorities to make extraordinary efforts to keep it from reaching Sochi, a resort city on the Black Sea coast among the foothills of the Caucasus. The city will effectively be locked down starting Jan. 7, with all traffic banned except officially registered vehicles. Visitors to the Olympics, which begin on Feb. 7, will be required to obtain a special pass to enter the region.

With security so tight at the site of the Games, experts have warned that insurgents who want to disrupt the Olympics might turn instead to “softer” targets elsewhere. On Friday, an explosion in a car killed three people in Pyatigorsk, another city in the Caucasus; details of that attack remain sketchy, and it was not clear whether it was related to the bombings Sunday and Monday.

Doku Umarov, the Chechen rebel fighter who now leads a terrorist group known as the Caucasus Emirate, vowed in July to attack in Sochi, calling the Games “satanic.”

“They plan to hold the Olympics on the bones of our ancestors, on the bones of many, many dead Muslims, buried on the territory of our land on the Black Sea,” Mr. Umarov said in a video. He emerged from the ruins of Chechnya’s separatist movement, which was largely defeated by the authorities under Mr. Putin; he has claimed responsibility for two suicide bombings in Moscow in 2010 and 2011.

As Coronavirus Pandemic Ravages Earth, Trump Announces Push to Mine the Moon
More in:
Russia, Moscow

In a year that just takes and takes, the sudden death of Ruth Bader Ginsburg has, for now, broken many. And that's before the vile McConnell vowed within an hour to try to replace her. Jewish tradition deems a person who dies on Rosh Hashanah a tzaddik, a person of great righteousness. Because she was, we're compelled to honor her long, hard, tenacious work by fighting back harder than ever. Now we cry, soon we vote. M ay her memory be a blessing, and a revolution.
Read More...
END_OF_DOCUMENT_TOKEN_TO_BE_REPLACED