SUBSCRIBE DONATE
Published on
Monday, June 01, 2020
by
The Progressive

Days of Rage in Milwaukee

City rocked by weekend of protests and clashes.

Protesters march in Milwaukee on May 30. (Photo: Isiah Holmes)

Over the weekend, protests and civil disobedience erupted in the city of Milwaukee, as in other cities across the country. Chanting “Black Lives Matter,” “I can’t breathe,” and the names of African American men and women who have been killed by law enforcement, thousands of residents marched twelve miles through one of America’s most segregated cities.

Protesters continued marching down the center of the street and met up at Red Arrow Park, where Dontre Hamilton was killed by a police officer, and organizers paid respects with a moment of silence and prayers before continuing on.

Though the killing of George Floyd by a Minneapolis police officer who knelt on his neck catalyzed the nationwide resistance, marchers also paid respect to other people who lost their lives to police brutality. In Milwaukee, a recent case involved an off-duty officer who beat a man to death during a confrontation at the officer’s home. Officer Michael Mattioli, thirty-two, was hosting a party at his home while the state’s Safer at Home order was in effect, prohibiting such gatherings. Mattioli has since been arrested and charged with first-degree reckless homicide.

That’s just one of many incidents that brought thousands of Milwaukee residents out to march in the city. Protesters also chanted the names of Dontre Hamilton, who was shot by Milwaukee officers in 2014, as well as the names of other African Americans who’ve died in other states including twelve-year-old Tamir Rice from Cleveland, and twenty-eight-year-old Sandra Bland from Texas. 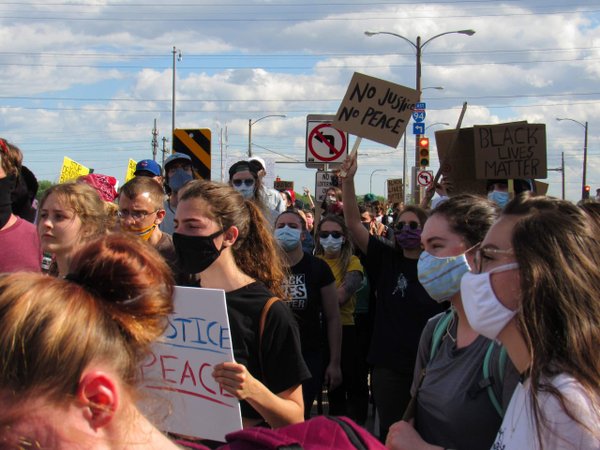 Several gatherings were organized by different community leaders and activists, in different locations in the city on Friday. At noon on the corner of 27th and Center Street, activist Vaun Mayes helped organize a stationary protest with a large crowd. Some demonstrators lined the nearby street, holding signs and drawing encouraging honks from passing drivers. A large group gathered around Mayes and other speakers in a huddle, as they voiced their grievances and laid out why gathering was necessary.

“Probably about 200-plus people,” said Mayes, describing the gathering, which ended as marchers took to the streets and headed east, toward the lake. “All races from a little bit of everywhere, from the North Side, South Side, from all over Wisconsin.” The stationary demonstration was peaceful and lightly policed. Other community organizers, not Mayes, led the demonstrators to march into the streets.

“It’s beautiful to get people together,” Mayes told Wisconsin Examiner. “It’s always sad that unity for black people happens at funerals and bad stuff like this, but we come together and we’re all on the same page. It takes us away from our daily lives, and it gives us a little bit more perspective than we’re used to, to allow ourselves to embarrass each other.”

Within a couple of hours, marchers who began on 49th Street and Cleveland Avenue marched more than two miles to Miller Park Way and National Avenue. Protesters were attempting to demonstrate on or near the highway, which provoked rapid responses from law enforcement. Officers from the Milwaukee Police Department and Milwaukee County Sheriff’s Office blocked highways in riot gear.

No confrontations between officers and demonstrators occurred at this point and, as the crowd marched down National Avenue through Milwaukee’s South Side, officers blocked side streets but otherwise did not intervene. Around this time, MPD told Wisconsin Examiner, “at this time the Milwaukee Police Department has not had many interactions with protesters. We are asking those who protest in Milwaukee to remain peaceful.” Nevertheless, some protesters came prepared with supplies to counteract tear gas and treat wounds inflicted in clashes with police.

“They were shooting rubber bullets at peaceful protesters long before the looting began.”

Dusk drew to night, and protesters continued marching down the center of the street and, nearly five miles later, met up at a rendezvous point—Red Arrow Park. This is the place where Dontre Hamilton was killed by a police officer, and organizers paid respects with a moment of silence and prayers before continuing on. Occasionally, the marchers would stop and block major intersections.

Frank Nitty, an activist who helped lead the march with a loudspeaker, urged the marchers to remember one another. “I want you to look around,” he said during one of the respites. “We’re standing together with love, peace, and we’re standing together to be strong. We got to love one another.” Nitty highlighted the fact that the marchers were peacefully assembling, and without weapons. “We have to stop fighting amongst each other. We got to stop hating each other, and we have to stand together.”

As the march flooded the roads and sidewalks, it grew in size as people from nearby neighborhoods left their homes to join. A caravan of cars trailed the marchers, and other cars honked their support when they were stopped by the march. Other demonstrators in cars, on skateboards and on bicycles rode ahead of the pack to divert traffic away from the march. Law enforcement, however, also gradually increased its presence. Adjacent streets were proactively blocked off, and drones followed overhead. Mayor Tom Barrett urged the protesters to be peaceful, as did other county and city officials.

As midnight approached, demonstrators had organized around the MPD District Five building. Officers in riot gear formed a wall around the building, and snipers took up positions on the rooftop. Many fled as officers launched gas canisters to disperse the crowd. Not all of the people present had marched all day. The crowd was reinvigorated by nearby residents who came out to see what was going on. “Either tear gas or smoke bombs,” Rafael Smith, a local who went out to see the demonstration at the station, told Wisconsin Examiner. “Also, they were shooting rubber bullets at peaceful protesters long before the looting began.” One man Smith encountered had been hit in the head by a gas canister.

A sheriff’s vehicle forced itself through a crowd of walking demonstrators. “That’s why we’re out here, to document things like that,” Wilson said as the squad car drove away.

Sixteen businesses were looted or damaged, and residents who saw a fire in a nearby Walgreens promptly put it out. The next day, with more demonstrations planned, law enforcement upped the ante. A 9 p.m. curfew was imposed, and the National Guard was put on alert for possible looting. Again, droves of residents from across the ethnic, age, and gender spectrum came out even though many still had aching legs and feet from having marched the day before. Sean Wilson, of the American Civil Liberties Union’s Smart Justice Campaign, was serving as a legal observer during the second day. “For the most part it’s been calm,” he told Wisconsin Examiner.

Seconds after he made that statement, however, a sheriff’s vehicle forced itself through a crowd of walking demonstrators. “That’s why we’re out here, to document things like that,” Wilson said as the squad car drove away. “We perfectly understand that it can get tense, but we want to document protesters’ interactions with law enforcement. And, they [the police] could have handled that better.”

Isaiah Santiago, a protester in his early twenties, said the demonstrations were important for every American to be involved in. “It’s a fight bigger than all of us,” he told Wisconsin Examiner, “it’s a fight for equality. True equality. What that means for all of us right now, is that some of our people are targeted, killed in the streets to no avail. For no reason. So we’re all out here to put a stop to police brutality, hopefully get some reforms in action, [and] re-think how our police work. Because really, our police should be policing with us, not against us.”

Protesters appear determined to keep up the momentum, and urge peaceful assembly and civil disruption. Marches continued throughout Sunday, as did the curfew which took effect at the same time as Saturday.

Still activists, residents, and community leaders are undeterred. Santiago and friends are compiling a list of police reform demands, which will be crafted into legislative proposals by My Democracy USA. Santiago hopes those proposals will gain traction and mass support. “It really starts with how they [police] think,” he told Wisconsin Examiner. “They need much more training than they’re given already.” Nationwide, this appears to be a movement without rest.

This article first appeared in the Wisconsin Examiner.

Isiah Holmes is a journalist and videographer born and raised in Milwaukee, Wisconsin.

END_OF_DOCUMENT_TOKEN_TO_BE_REPLACED

In a rare legal move amidst the ongoing unraveling of law enforcement's narrative about the murder of Breonna Taylor - a false claim of no body cam footage, an A.G. who failed to consider a homicide charge and used the Grand Jury as "a shield," God knows what else - a judge has granted the request of an anonymous juror their Grand Jury proceedings be made public. The juror's lawyer said his client feels "certain questions were left unanswered" and the public should know "the full story."
Read More...
END_OF_DOCUMENT_TOKEN_TO_BE_REPLACED