SUBSCRIBE DONATE
Published on
Wednesday, February 05, 2020
by
Fairness and Accuracy In Reporting (FAIR)

The Trump Impeachment Trial: Witness to a Farce

The New York Times was content to cover it as a Washington drama and no more; its impeachment landing page even lists a "cast of characters."

Watching impeachment through the lens of the New York Times. (Photo: Screenshot)

Watching the actions of the Trump administration through the lens of the New York Times’ coverage has been by turns dumbfounding, disheartening and infuriating. While the white nationalists running our government have rolled out one attack after another on civil rights, civil liberties, the independence of the judiciary, procedural democracy, human rights laws and planetary survival, the “paper of record” has offered a soothing translation of these threats into the familiar language of Beltway politics—an anesthetizing stew of “he said, she said” false equivalences that juxtaposes claims and lies by Trump and Trumpsters with statements by others, often statements of fact, with no indication of the veracity of either side; an intense dedication to avoiding referring to anything as racist; and a general, unspoken pretense that Trump is just another president, which for the Times means extending to him its ever-reliable commitment to legitimating and stabilizing power. Never mind how dangerous this regime might be to the rest of us.

It’s as though the Times signed up to be part of the emperor’s entourage, reassuring itself and everyone around it that there is indeed a fine garment or government there, when in reality there is nothing but naked self-dealing, greed, deceit, unchecked bigotry and vulgar self-aggrandizement. 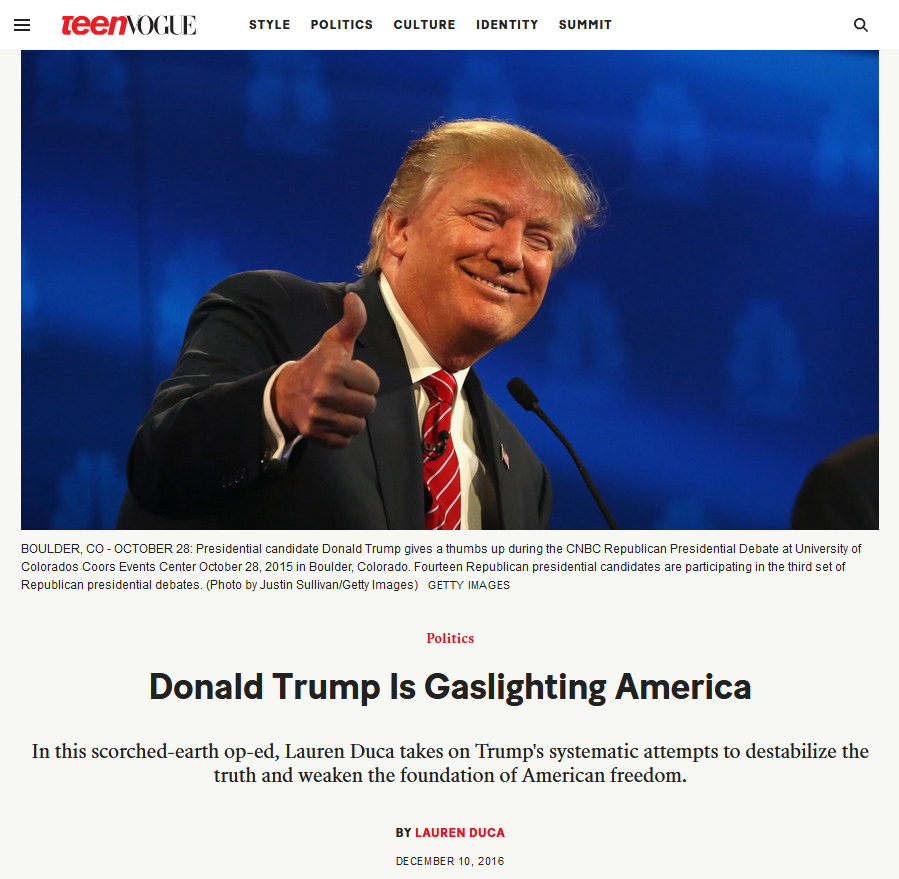 Lauren Duca’s famous clarion call in Teen Vogue (12/10/16) to resist Trump’s gaslighting is as on-point today as it was in December 2016. But in the interim, the dogged determination by corporate media, with the New York Times leading the pack, to normalize all that should never be normalized has taken its toll.

In January 2017, thousands of people across the country flocked to airports to protest Trump’s Muslim ban when it was first decreed by executive order. But after three years of media headlines euphemistically referring to it as a “travel ban,” and the Supreme Court’s 2018 blessing of this fig leaf of respectability, the news last week that the Muslim ban was being expanded to six additional countries did not result in a similar outpouring of protest.

Outrage fatigue is perhaps inevitable, given the relentless pace of the outrages, but the function of journalism should not be to reassure us that everything really is OK when it simply is not.

Yet this is precisely what the Times’ coverage of the impeachment process has consistently done. Throughout, it has underplayed the danger to democracy, both of Trump’s obstruction of the process and the brazen resolve by Republicans to absolve him no matter what. How the paper covered the Senate’s refusal to allow witnesses in the trial is a case in point.

The administration’s efforts to keep evidence out of the impeachment proceedings ran the gamut, from defying subpoenas to smearing witnesses, in a successful effort to create the perfect circular argument: Because no eyewitnesses were allowed to testify, there was no corroboration of the charges, and hence the charges had not been sufficiently proven. 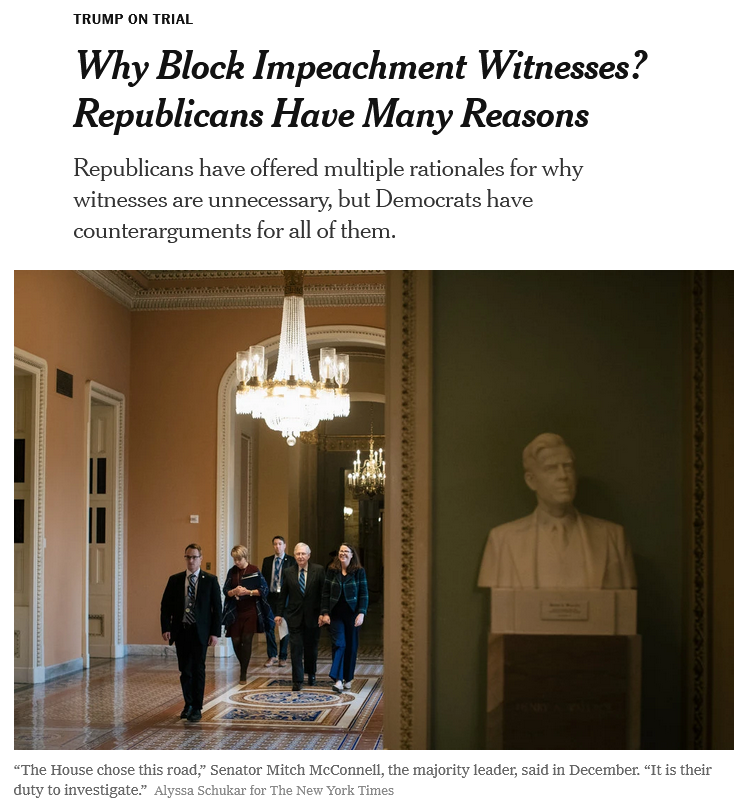 But while everybody inside and outside of Washington knows that the GOP fought to keep witnesses out of both the House and Senate proceedings precisely because they could corroborate the existing evidence, the Times (1/30/20) ran an entire piece headlined “Why Block Impeachment Witnesses? Republicans Have Many Reasons” without ever stating as much. The supposed reasons ranged from “Witnesses were the House’s job” to “House prosecutors claim they already have an ironclad case.” The article’s straight-faced recitation of such GOP “arguments” and Democratic “counterarguments” about the battle in the Senate insulted its readers’ intelligence.

The last argument regurgitated by the Times asserted, “House prosecutors have produced no new information crying out for corroboration by witnesses,” an argument worthy of Leo Rosten’s classic definition of chutzpah: “that quality enshrined in a man who, having killed his mother and father, throws himself on the mercy of the court because he is an orphan.” Yet the Times described this as “an argument that thoroughly irritates Democrats,” as though that were somehow an unexpected response, and qualified the White House’s stonewalling as mere opinion on the Democrats’ part.

The article (1/31/20) reporting Friday night’s vote to refuse to consider witnesses did no better. The closest it came to stating the obvious reason for the stonewalling was in a comment on the Republicans’ strategy: “Senate Republicans made a wager…that it was better to withstand the short-term criticisms rather than to allow the proceeding to stretch on and risking damaging revelations.” (Emphasis added.) 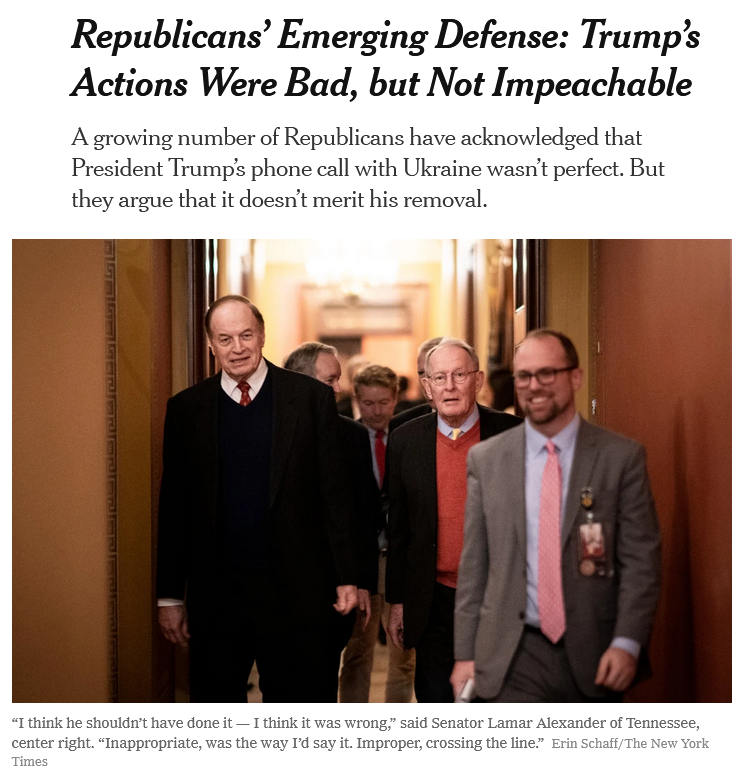 The witness battle lost, the Times (2/2/20) moved on unbothered to cover the GOP’s next move with equal credulity. “Republicans’ Emerging Defense: Trump’s Actions Were Bad, but Not Impeachable,” Sunday’s headline announced, and the accompanying article quoted multiple senators who basically all said, “Yeah, he did it, but it’s not that big a deal.”

The Republican shift to the “not such a big deal” defense was utterly predictable, especially in light of the Democrats’ failure to use the impeachment process to lay out the full scope of Trump’s crimes, from sexual assault to human rights abuses to self-dealing to obstruction of justice to the constant lying. It is clear now, as many of us predicted, that the Democrats’ decision to pursue a narrow prosecution was a huge political miscalculation that fundamentally failed to grasp the terms on which the Republicans are operating.

The corruption of the GOP in all this is, in fact, staggering. Hypocrisy only begins to describe their actions, and their willingness to go along with whatever Trump does so long as he continues to enable various right-wing agendas—from tax cuts for the rich, to extremist judicial appointments set to overturn LGBTQ rights and abortion rights, to mass detention of immigrants—represents the real constitutional crisis we are in. If Congress did its job in checking presidential power, this all would have been over years ago.

So now we are on the verge of the legislative branch’s blessing of the executive’s lawlessness, and all the New York Times (1/31/20) is willing to do is keep score of how each “side” is using the moment to their advantage:

His expected acquittal is also likely to leave the president emboldened. He will argue that Democrats, unelected bureaucrats and the mainstream news media have targeted him because of their disdain for his supporters, and that his fight for political survival is theirs as well. Democrats, too, planned to capitalize on the impeachment fight by urging voters to punish Republicans for refusing to demand a more thorough trial and for sticking with Mr. Trump despite evidence of his misdeeds.

And instead of seeing the “not a big deal” defense of Republicans as a green light to further executive abuses, and a signal that Trump is indeed above the law, the Times (2/2/20) seems to think that its repeated reminder that some Republicans were willing to criticize Trump even as they prepared to acquit him was reassuring:

The Republicans’ argument also stands starkly at odds with what Mr. Trump—who has deemed a phone call he had with Ukraine’s president “perfect” and has resisted any suggestion that he acted improperly — has demanded from his defenders.

If this is what counts as a congressional check on the presidency these days, then we’re screwed. 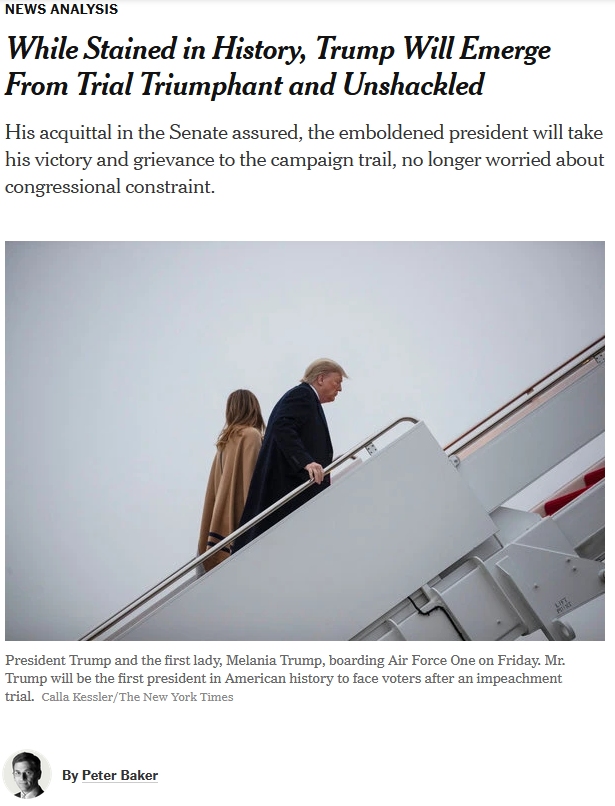 The closest the Times (2/1/20) has come to acknowledging the growing threat of authoritarianism was, I’m sure, unintentional. The opening of a news analysis by White House correspondent Peter Baker, headlined “While Stained in History, Trump Will Emerge From Trial Triumphant and Unshackled,” borrows from Ralph Waldo Emerson: “‘When you strike at a king,’ Emerson famously said, ‘you must kill him.’ Mr. Trump’s foes struck at him but did not take him down.”

We don’t live in a monarchy. We live in a constitutional system that envisions checks on executive power that make regicide obsolete. But this analogy is more apt than the Times is willing to admit. Throughout this piece, and in the other pieces discussed here, the paper talks about an “emboldened” Trump. It notes:

He has already used his power in ways that presidents since Richard M. Nixon considered out of line, like firing an FBI director who was investigating him and browbeating the Justice Department to investigate his political foes.

Yet nowhere in this piece is there a hint of alarm at what this might mean for the US, and especially for the people who have been in Trump’s crosshairs throughout his presidency. It refers obliquely to his goal of “further restricting immigration,” for instance, but there is no concern anywhere about the possibility of escalating human rights abuses that this would entail. After all, the pre-emboldened Trump already brought us family separations, kids in cages, the asylum ban and “remain in Mexico.”

The final vote to acquit Trump is set for Wednesday, February 5. But once the witness fight was over, the New York Times was ready to move on. Saturday’s “Unshackled” piece was followed by a fluff piece on Sunday  (2/2/20), headlined “Impeachment All but Behind Him, Trump Celebrates and Keeps Focus on Bloomberg.” In it, the Times reports on the president’s victory lap at Mar-a-Lago and on Sean Hannity’s show right before the Superbowl, with generous coverage of his tweets thrown in.

An assessment of the damage of this impeachment process—the expansion of executive power, the impunity with which the administration obstructed the investigation, the complicity of the legislature in greenlighting presidential lawlessness—will have to be done elsewhere. The New York Times was content to cover it as a Washington drama and no more; its impeachment landing page even lists a “cast of characters.”

But this isn’t Shakespeare, though it is a farce.