SUBSCRIBE DONATE
Published on
Saturday, March 10, 2018
by
Fairness and Accuracy In Reporting (FAIR)

In a media system structurally designed to be "enthusiastically supportive" of business, the failure of outlets to provide insightful coverage of workers' struggles is glaring

On any given day, the American public can watch one of several Wall Street–focused cable news channels, read numerous high finance–oriented newspapers (as well as ubiquitous business sections in others), or click on a seemingly endless supply of online sites and news apps tracking the profits and losses of US businesses and corporations. It’s not a stretch to say that the business of modern American journalism is, to a stunning degree, about covering business.

This is not a new phenomenon. In the late 19th century, the New York Times famously adopted a pose of “objectivity”—which soon became the profession’s national animating philosophy—in large part to appeal to a wider business audience and sell more ads. But for much of the 20th century, press attention paid to Wall Street and corporations was coupled with a similar focus on covering unions and labor movements.

No longer is that the case. As union membership has declined from about 35 percent of US workers 50 years ago to barely 10 percent now, the mainstream press’ broader institutional interest in the labor beat has ebbed as well, as Columbia Journalism Review (3/12/15) noted several years ago. Today, we are left with a vast news infrastructure that ceaselessly covers management concerns and breathlessly fêtes CEOs, while critical labor issues—like workers’ rights and safety, stagnant middle-class wages, and a decades-long campaign to undermine union power—struggle to get mentioned in the press.

The statewide teachers and school staffers strike in West Virginia—just concluded earlier this week with a stunning victory by the union—offers an ominous case study of the state of labor coverage in the national press. More than 20,000 teachers and 13,000 staffers walked out, shutting down every school in the state, despite having no legal “right” to strike—a remarkable feat. Yet many in the corporate media took days to notice the story, while others neglected to cover it until the stoppage was all but resolved. Some chose to rely heavily upon wire service coverage to backstop a lack of in-house coverage, effectively treating the strike like a local, general interest item, rather than as a story with larger political ramifications, as is already evident. (The pay and healthcare cost issues raised by the West Virginia teachers have now sparked or shored up a movement among educators in states like Oklahoma, Arizona and Kentucky to consider similar actions.)

Former longtime New York Times labor reporter Steven Greenhouse noticed the media’s delayed response. “I think the national press was maybe a day or two late writing about this,” he said. “I think it took people some time to realize that it’s a very big strike and the stakes are really interesting.” He says there is noticeably less news coverage of strikes than there used to be—partly because there are fewer strikes; and even those that happen are seen as more of a private dispute between two parties. “Fifty years ago, when there was a strike, or even 30 years ago, a lot of editors thought this would be a matter of public import,” he notes.

Greenhouse, who left the Times in late 2014 after 31 years at the paper, was part of a dying breed in the mainstream press. Currently, only a handful of national corporate news outlets have reporters specifically assigned to cover labor issues: the New York Times (Noam Scheiber), Huffington Post (Dave Jamieson), Bloomberg News (Josh Eidelson),  Washington Post (Danielle Paquette) and Politico (Timothy Noah, who is editor of labor policy). The Wall Street Journal’s last labor reporter, Melanie Trottman, left several months ago without being replaced.

Not surprisingly, dedicating staff to reporting on labor issues seemed to correlate with earlier coverage of the West Virginia teachers’ strike. The Huffington Post ran its first story on West Virginia teachers’ pay issues in early February and had its second story—on a smaller, one-day walkout—the week before the statewide strike began. The Times, Bloomberg and the Washington Post all had on-the-ground reports by the strike’s second day.

By contrast, the three broadcast networks, CNN and MSNBC took several more days before their first, in-house coverage. Fox News and Politico, despite the latter’s labor beat, brought up the rear, essentially foregoing any real coverage until the strike was all but resolved. (Worth noting: Politico did mention the strike every day from its inception in a daily news brief and, curiously, neither the Times’ nor Washington Post’s labor reporters wrote a single story about the two-week-long strike, which was covered by other reporters at those papers.) 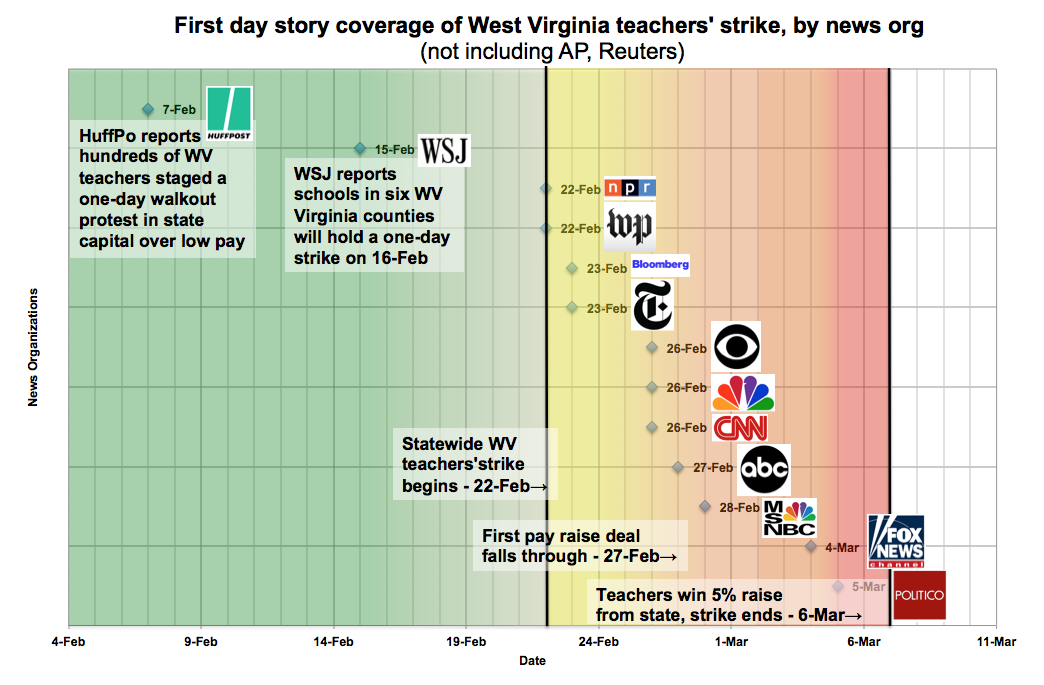 Though many in the national press arrived late, most of them ramped up their coverage as the strike continued into its second week. And after the teachers rejected a proposed half-measure solution on February 27 from the state’s Republican-led legislature—a smaller-than-demanded pay raise and no help defraying healthcare costs—coverage expanded considerably in the strike’s second week.

The Times, which routinely drives TV and radio news choices, supplemented its coverage with six editorials during the second week of the strike, pushing the issue beyond the news pages and into the broader discourse. CBS, NBC and ABC News had all run multiple segments on the strike on their evening news and morning broadcasts by the second week. CNN went hard into the story, with numerous, on-the-ground reports and segments that dug into the pay and healthcare cost issues prompting the strike.

Others, however, still lagged far behind. Politico’s lack of interest in a story without a DC-insider angle was palpable; it ran just two news articles over two weeks. MSNBC’s belated and subdued news interest was perhaps the most striking. As FAIR (3/2/18) has pointed out, the “liberal” cable network’s high-profile primetime hosts completely ignored the strike well into its second week. And the Journal’s early coverage fizzled out, too. Of note, over the second weekend of the strike, the Journal’s reporter left West Virginia for western Pennsylvania, to write up yet another Trump-supporter profile story about the president’s recently announced steel tariffs. 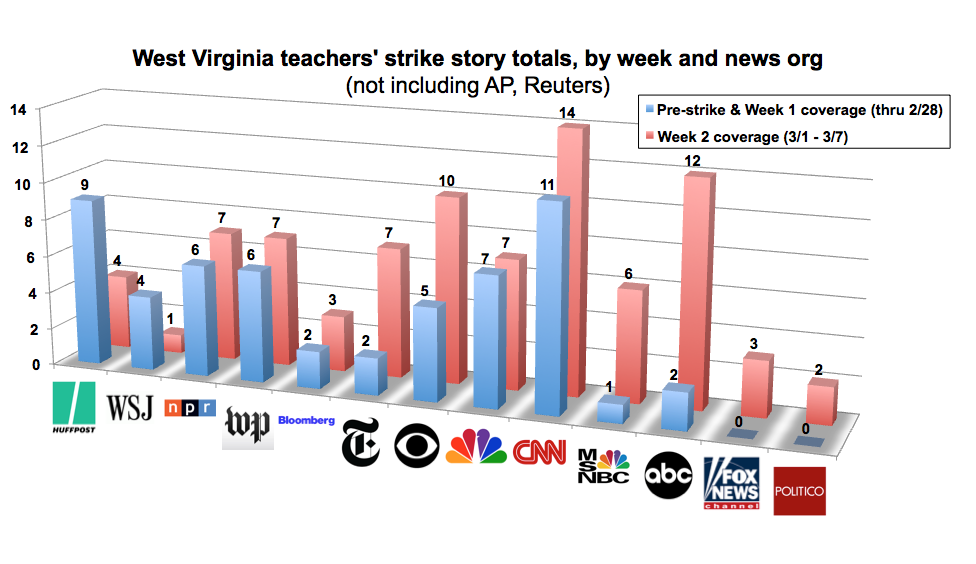 This juxtaposition should raise some hard questions about how the press covers workers. Ever since Trump’s surprise election in 2016, corporate media outlets have fallen over themselves to chronicle the struggles of the white working class in the Midwest, often to the exclusion of other key parts of the electorate. So much so, that this story genre has quickly lapsed into clichéd parody (FAIR.org, 2/15/17). The struggles of workers in West Virginia, though not a swing state in the presidential race, also figured heavily in Trump’s campaign rhetoric. Yet a national press corps that for the past year has seemingly been eager to send its national correspondents into every steeltown diner between the Delaware and the Mississippi was mostly caught flat-footed by a massive teacher protest in the heart of blue-collar America.

Greenhouse also noted that, as a result of the dwindling corps of full-time labor reporters, economic, education and regional reporters are left to pick up the slack of covering workers’ issues—when they can, that is. This shift in emphasis makes labor coverage even more of an afterthought for resource-strapped assignment editors. “How many people are really going to be affected by this strike? Does this story intersect with any of our other beats? Why should West Virginia teachers interest people in Oregon or Arizona?” These are the kinds of questions that increasingly drive newsroom decision-making about labor or union stories, and they can present a higher bar to clear to justify coverage.

While no one would argue that the press must cover every single labor/management dispute, a clinical, how-many-will-be-impacted mindset—in particular when covering strikes—can have insidious effects, leading reporters to dismiss as unworthy of attention disputes that may appear minor but are far-reaching in their impact.

Ironically, this comes at a time when journalists themselves are increasingly energized about unionizing and seeing the fruits of that labor (pun intended). Notably, the recent successful union drive at the Los Angeles Times literally saved the newsroom from a corporate owner planning drastic cuts.

Not every publisher is inclined to endure newsroom resistance, however. Last fall, Washington Post reporter Fredrick Kunkle, in his role as a labor union official, wrote a HuffPo op-ed (9/1/17) criticizing the paper’s billionaire owner, Jeff Bezos, for his shoddy track record of shortchanging workers. Kunkle was subsequently disciplined for breaking a company rule about “freelancing,” but union officials argued that Post management actually violated labor law by trying to squelch his free speech.

That newsrooms are a newly fractious frontline between corporate parents and unionizing employees may offer a silver lining in the form of a rekindled interest in labor issues. With more firsthand knowledge of pay cuts, healthcare plan erosion and anti-union campaigns, perhaps reporters, producers and editors will start to break out of the profession’s slow spiral down into reactive, resource-strapped coverage that prioritizes workers’ rights below the convenience of consumers (who are addressed as though most were not also workers) and employers’ bottom lines.

That kind of news framing focuses primarily on the impact upon the company, or inconvenience to the broader public, which effectively prejudices coverage against striking workers, as labor scholars like Christopher Martin have pointed out. As Martin wrote in his book Framed:

The ultimate outcome of the news media’s consumer-oriented framing of labor stories is that the news is often severely critical of labor’s actions and and enthusiastically supportive of capital’s actions.

This implicit bias will continue to cause some in corporate media to overlook or neglect stories like the statewide West Virginia school workers strike. In a media system that is structurally designed to be “enthusiastically supportive” of business, the diminishment of workers voices is a loss we can’t afford.

Why Biden Must Reverse Trump Policy on Landmines Now

Feast Your Eyes on the Trillion-Dollar SUV

'This Fight Is Far From Over': Amazon Union Vote Shows Exactly Why We Need the PRO Act
More in:
Donald Trump, Jeff Bezos, Washington Post

END_OF_DOCUMENT_TOKEN_TO_BE_REPLACED

It never ends. Even as another cop kills another black guy in Minneapolis, harrowing video shows yahoo unfit cops in Virginia pulling guns on, screaming at, pepper-spraying, kicking, handcuffing and threatening to execute Lieut. Caron Nazario, a black Latino member of the U.S. Army Medical Corps in his uniform for...NOTHING. "Why am I being treated like this?" Nazario keeps asking. Brutally simple: America, racism, "domination and humiliation of a black man" - again.
Read More...
END_OF_DOCUMENT_TOKEN_TO_BE_REPLACED