SUBSCRIBE DONATE
Published on
Wednesday, December 27, 2017
by
The Irish Times

I Thought I Was Ready to Leave America. 2017 Changed My Mind.

Was I really going to pull an ‘Irish goodbye’ now that things had got real?

‘America had educated me. Given me employment opportunities I would never have gotten in Ireland. Brought me love and friendship. Exposed me to some incredible highs and horrific lows.’ (Photo: Carmel McMahon)

I emigrated to New York in 1993. I was 20 years old. I carried two suitcases, $500 and a notebook of poems I had scribbled in secret. The vehicle that got me from Ashbourne in Co Meath to Manhattan was a modeling contract.

I wanted to go to college after secondary school, but that was not an option; fees for undergraduates were not abolished until 1996, and the money I would earn at a job was desperately needed to help out at home, as there were seven other kids in our house, six of them younger than me.

I became a sales associate at a clothing shop on Grafton Street. My co-workers talked about getting married and having children. I felt like I was walking through glue. I had to get out so I applied and got the Morrison Visa.

In New York at the time, the look was “heroin chic”. By default, I had it down. I subsisted on coffee, toast and cigarettes. My ribs protruded from my back, and my eyes were sunken and dark, but for the first time in my life, I could really breathe. I didn’t last long as a model, but I found easy employment as a cocktail waitress, and fell in with a Brooklyn art collective who embraced me as I was: undernourished, uneducated, young, curious, and up for just about anything. 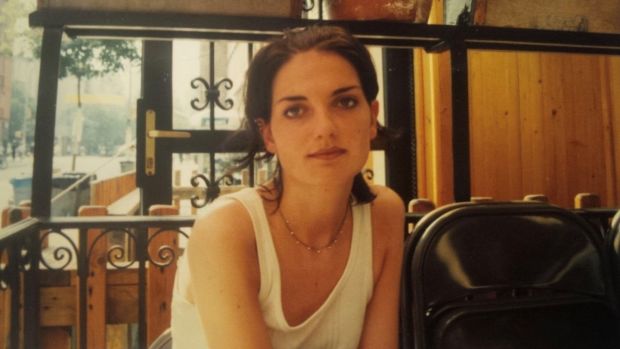 Carmel McMahon at Cafe Mogador in the East Village in 1995

I did get myself to college eventually, where I majored in English and Philosophy. I was drawn to Postcolonial and Women’s Literature, and the power dynamics between oppressors and oppressed. I began to wake up. I was learning about the social, economic and cultural forces that shape our lives. I was learning that the same misogynistic systems that created the world in which my mother’s generation survived their disembodied experience, created mine.

Ireland, a “nation of emigrants” played a bigger role in my life than I had previously acknowledged. Until then, I had seen myself as an individual adventurer; now I also see myself in the steady stream of emigrants that has been pouring out of Ireland since the early 19th century.

I used to spend hours numbing out on Daft.ie, trolling for my perfect Irish cottage. Close enough to the city, not too close to the family. There was always that internal pull toward “home”. I was just waiting for the right opportunity.

As the years passed the cottages became distinctly more “Irish”. I’d narrowed my search down to, “thatched roof”, all the better if there was a chimney out of which the smoke of this nostalgic vision could cloud my perception of reality, and keep me suspended and uncommitted in the inbetweeness of here and there.

Then, on November 8th, 2016, man with multiple sexual harassment accusations and suits against him, who admitted on tape that he grabs women by the genitals, was elected to the highest office in the United States. His first order of business was to sign an executive order to proceed with the construction of the Dakota Access Pipe Line through native land. The nostalgia evaporated.

America had educated me. Given me employment opportunities I would never have gotten in Ireland. Brought me love and friendship. Exposed me to some incredible highs and horrific lows. Got me into therapy when it was still a dirty word in Ireland. Was I really going to pull an “Irish goodbye” now that things had got real?

I became a citizen in 2001 just after the September 11th attacks on the World Trade Center. For weeks, I watched the smoking towers from my roof. I walked in a daze through the dust of the dead. I had just returned from a road trip around the US with my best friend. We saw the great cities and the rural back waters, the strip malls and the native holy grounds. I knew this nation was built on the double fault lines of genocide and slavery. I concluded then, that no country is perfect, but wherever I chose to live, I would engage in the struggle to make things better. However incrementally.

I became politically active during the Bush years and even did a stint in jail for an act of civil disobedience during a protest. That seemed to be what was called for then.

This morning I am writing in Central Park, our communal back yard. It is crisp and sunny. An American Robin is pecking about my feet. He is much bigger than his Irish counterpart, but he is still a fragile little bird.

I breathe deep into the nowness. I feel the potential out of which the future is being created. It is very good. Being conscious in my body is the radical act of resistance this moment calls for. I move between two nations, but I pledge allegiance to this earth.

From this place, my roots connect through time with the women, minorities and other immigrants of this land. Together we stand our ground.

Carmel McMahon’s memoir, In Ordinary Time, will be published next year.

The Kind of Coronavirus Response Package We Need

Hate in the Time of Coronavirus: A Real Emergency at the Border

Because 'Anne Frank Did Not Die in a Gas Chamber,' Jewish Activists Cite Disease in Nazi Death Camps in Call to Free Detained Immigrants
More in:
U.S.
,
Immigration

Heidi Shierholz
'Portrait of Disaster': Initial Unemployment Claims in US Jump from 211,000 to 6.6 million in Just 3 Weeks...

Robert C. Koehler
The Fury and the Folly: We Need a Vaccine to Stop Endless War

Robert Reich
How to Prepare for the Trump Recession

Dorothee Benz
When the Invisible Hand Gives You the Finger

Ed Bolen
Unemployed Workers Can Get SNAP During Health Emergency

Christopher D. Cook
Where’s the Money for Health Care and Saving the Planet? Well, We Clearly Have It.
END_OF_DOCUMENT_TOKEN_TO_BE_REPLACED
Connect With Us

END_OF_DOCUMENT_TOKEN_TO_BE_REPLACED

More clusterfuck from a government eager to use its power to put kids in cages but now nowhere in sight: States in bidding wars for equipment, a cancelled warning system for pandemics, just-ordered golf carts. Blessedly, many have stepped into the vacuum, from kitchen-table mask-sewers to thousands of people lending their RVs to bone-weary doctors and nurses in need of refuge that won't infect their families - a tender, spontaneous exercise in "everything that is right and good in this world."
Read More...
END_OF_DOCUMENT_TOKEN_TO_BE_REPLACED