Getting It Wrong on Paris, Terror, Racism & Student Protests

In the wake of Friday’s horrific terror attack in Paris, social media went nuts. Right on cue, while most of us were expressing sympathy and solidarity, assorted partisans started using the grim news to push their pre-fabricated agendas.

Among many ugly expressions popping up online that day, former New York Times reporter Judith Miller’s tweet jumped out at me: 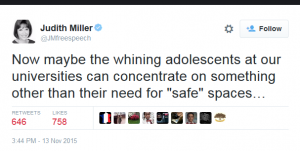 Miller, you may remember, is the reporter who published a series of stories in the New York Times based on leaks from top officials – most shown later to be spectacularly wrong – that helped fuel the run-up to George W. Bush’s invasion of Iraq. What gets me about this tweet (and to be fair, others tweeted similar sentiments) isn’t just the nasty tone, and it’s not even how Miller’s reporting helped propel the war that arguably opened the door to the creation of ISIS in the first place. It’s how totally Miller misunderstands the issues involved.

Miller imagines that somehow the effort against terrorism is different from and more important than the fight against racism and intolerance. In fact, the two fights are one and the same.
The root problem isn’t Islam or Syrian refugees or unruly students on U.S. college campuses. It’s hatred of people who are different. It’s treating people as “other” and thus less than human because they read a different holy book (or none at all), speak a different language, were born on the other side of an arbitrary national border, or have a different skin color, sexual orientation or gender expression.

That’s what allows ISIS to slaughter perfect strangers it assumes don’t share its twisted interpretation of the Koran. It’s what lets students shout “n****r!” at black students at the University of Missouri and make death threats against those who protest against racism on campus. It’s what lets Donald Trump praise the brutal and racist “Operation Wetback” and see his poll numbers rise.

The problem isn’t any particular religion or ethnicity or political view. The problem is hatred. The answer is to oppose hatred wherever and whenever it appears – whether it’s in the Mideast, Paris, Ferguson, Baltimore or the University of Missouri.

Yes, I understand that there will be legitimate disagreements along the way. On campus in particular, the line between protecting minority students from harassment and stifling legitimate expressions of controversial views can be tricky, and humans sorting through these questions will make well-intentioned mistakes. Reasonable people can differ on where to draw the line.

Bruce Mirken is a San Francisco-based writer and the media director for the Greenlining Institute.

How Wars, Sanctions, and Militarism Made the Coronavirus Crisis Worse
More in:
World, War & Peace
,
In Wake of Paris, Race, War on Terror, Greenlining

Jim Hightower
Want to Get Into Some 'Good Trouble'? Join the Fight to Save Our Post Office...
END_OF_DOCUMENT_TOKEN_TO_BE_REPLACED
Connect With Us

END_OF_DOCUMENT_TOKEN_TO_BE_REPLACED

Finally. After 20,000 lies and 174 years in office, a journalist spoke truth to mendacious power during its daily hate speech. “Do you regret at all, all the lying you’ve done to the American people?” asked S.V. Dáte of the guy who'll be known as "the impeached president who made up the most stuff...pretty much every day." To end it, we "will have to decide that lying is unacceptable in our governance" - and with Dáte probably disappeared, gulag-like, his colleagues will have to grow a spine.
Read More...
END_OF_DOCUMENT_TOKEN_TO_BE_REPLACED