SUBSCRIBE DONATE
Published on
Saturday, January 01, 2011
by
the Guardian/UK

Recent decades have seen a massive redistribution of wealth, imposing the cost of successive crises on the poorest. Enough! 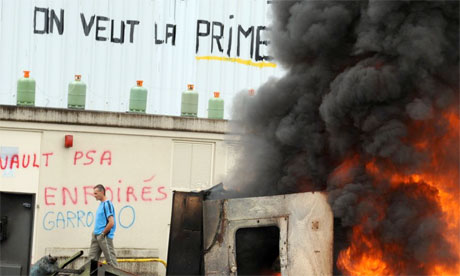 An employee of the New Fabris factory, in Chatellerault, central France, walks next to a fire in front of the plant, in 2009, after 366 laid-off workers occupied the factory and threatened to blow it up unless they receive a bigger pay-off. 'We want a bonus' is written on the wall in the background. (Alain Jocard/AFP)

The end of 2010 brought renewed Washington rhetoric, media hype and academic me-too declarations about the US economy "recovering". We've heard them before since the crisis hit in 2007. They always proved wrong.

But recovery noises are useful for some. Republicans claim that government should do less since recovery is underway (of course, for them, government action is always counterproductive). Likewise, Republicans and many centrist Democrats claim that income redistribution policies are no longer needed because recovery means growth, which means everyone gets a bigger piece of an expanding economic pie. Recovery hype also helps the Obama administration to claim that its policies succeeded.

Yet, this is more fantasy than reality. After all, the nearly 20% of the US labor force that became unemployed or underemployed in 2009 remains so as we enter 2011. No recovery there. Worse still, a quarter of those who found work since the crisis began only got temp jobs without benefits. Second, foreclosure actions by banks – including those who got most of the government's bailouts – continue to eject millions from their homes. No recovery there, either (except for the bigger banks).

Third, consider why the Federal Reserve decided last month to create another $600bn of new money, and why Congress and the president agreed in December on an additional fiscal stimulus (extending Bush's tax cuts, reducing social security withholding for 2011, etc). They took those steps because all the previous bailouts, monetary easing, tax cuts and government fiscal stimulus expenditures had failed to end this crisis. Those immune to hype recognize that more of the same policies that failed before might do so again.

More importantly, the recovery noise distracts from a more basic failure of our economic system: its fundamental instability. Recurring "downturns" – which neither private nor government actions have ever managed to prevent – impose massive costs on society. They plunge millions of effective, productive workers into unemployment and resulting personal, family and community disasters. Governments tap the collective purses of their nations chiefly to rescue just those private capitalists who were major contributors to the crisis and whose wealth insulates them from the crisis' worst effects.

Then, governments turn on their people to impose austerities (cutbacks in social programs, social security, etc) needed to restore government budgets busted by that rescue's huge costs. Like someone convicted of murdering his parents who demands leniency as an orphan, corporate America demands conservative government and austerity on the grounds of excessive budget deficits. Mainstream media and politicians take those corporate demands seriously, reminding us who controls whom.

The last half-century suggests a very different analysis of the crisis and a correspondingly different response for 2011. Since the early 1970s, workers' wage increases came to an end, their benefits and job security shrank and government supports for average people came under conservative attack. These increasing burdens were justified as absolutely necessary to enable more investment and, therefore, greater economic growth. A bigger economic pie would then provide more for everyone including workers.

In fact, growth in the US and Europe steadily slowed over those years (see graph below by University of Rome Professor Pasquale Tridico): 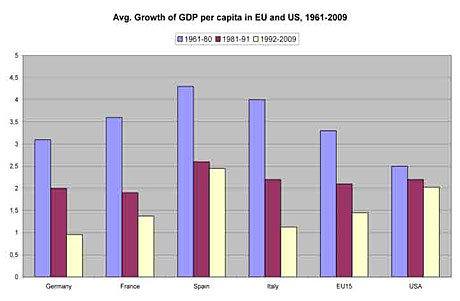 While workers' conditions deteriorated, capitalist surpluses and profits soared and stock markets boomed. Income and wealth were redistributed from poor and middle to the rich. But the promised results never materialized: neither more investment, nor greater economic growth. As the graph shows, growth actually slowed and then the whole system imploded into a catastrophic crisis.

Today's recovery noises accompany government actions that will repeat in 2011 more of the bailouts, monetary easing and fiscal stimuli that have proved insufficient since 2007. None of those actions dare to question, let alone address, how capitalism redistributed income and wealth in the decades leading to the crisis or how that redistribution contributed to the crisis.

The recovery being planned and hyped aims at a return to the US economy before it crashed. However, that capitalism was like a train hurtling toward the stone wall of crisis. To return to a pre-crisis capitalism risks resuming our places on a similar train heading for a similar crash.

Republican and Democratic politicians alike dare not link this crisis to an economic system that has never stopped producing those "downturns" that regularly cost so many millions of jobs, wasted resources, lost outputs and injured lives. For them, the economic system is beyond questioning. They bow before the unspoken taboo: never criticize the system upon which your careers depend.

Thus, this crisis and its burdens will continue until capitalists see sufficiently attractive opportunities for profit to resume investing and hiring people in the US as well as elsewhere. The freedoms of US capitalists to gain immense government supports as needed, and yet to invest only when, where and how they can maximize their private profits are paramount: the first obligations of government. The freedoms from want and insecurity for the US people remain a distant second priority – until mass political action changes that.

In good times, as in bad, capitalism is a system that places a small minority of people with one set of goals (profits, disproportionally high incomes, dominant political power, etc) in the positions to receive and distribute enormous wealth. Those people include the boards of directors that gather the net revenues of business into their hands and decide, together with the major shareholders in those businesses, how to distribute that wealth. Not surprisingly, they use it to achieve their goals and to make sure government secures their positions.

No Keynesian monetary or fiscal policies address, let alone change, how that system works and who uses its wealth to what ends. No reforms or regulations passed or even proposed under Obama would do that either. To avoid the instability of capitalism and its huge social costs requires changing the system. That remains the basic issue for a new year and a new generation. Will they break today's version of a dangerous old taboo: never question the existing system?

Richard D. Wolff is professor of economics emeritus at the University of Massachusetts, Amherst, where he taught economics from 1973 to 2008. He is currently a visiting professor in the graduate program in international affairs of the New School University, New York City. Richard also teaches classes regularly at the Brecht Forum in Manhattan. His books include: Capitalism's Crisis Deepens: Essays on the Global Economic Meltdown(2016); Democracy at Work: A Cure for Capitalism (2012); Occupy the Economy: Challenging Capitalism(2012); Contending Economic Theories: Neoclassical, Keynesian, and Marxian (2012); and Capitalism Hits the Fan: The Global Economic Meltdown and What to Do About It (2009). A full archive of Richard's work, including videos and podcasts, can be found on his site. Follow him on Twitter: @profwolff

Living on a Pandemic Planet: The Ultimate Stress Test
More in:
Austerity

END_OF_DOCUMENT_TOKEN_TO_BE_REPLACED

Even as eloquent, empathic voices are raised - Mattis' call to "live up to our values," Obama's recalling a country "founded on protest," Trudeau's long, loud silence on our horrors - we lurch toward fascism. Bringing the war home with a swarm of military in D.C., Bunker Boy's campaign is now shilling for "the Trump Army" - "YOU are the President's first line of defense" - complete with camo Keep America Great hats, because nothing says democracy like viewing people of conscience as the enemy.
Read More...
END_OF_DOCUMENT_TOKEN_TO_BE_REPLACED