Indiana Sen. Evan Bayh -- who was one of the most vocal cheerleaders for the invasion of Iraq, talks excitedly about punishing, and even bombing, Iran, and is now demanding full-scale escalation in Afghanistan -- was on Fox News yesterday and highlighted what a fraud most so-called "fiscal conservatives" and "deficit hawks" like him really are:

WALLACE: Senator Bayh, you brought up the question of cost, and the administration has put the cost -- and this is kind of astonishing to, I think, a lot of people -- $1 million per soldier per year, so if you sent 30,000 soldiers, that would be a $30 billion price tag.

Now, some top Democrats are talking about the idea -- the new idea of a war tax to pay for the escalation in Afghanistan. Good idea?

BAYH: No, I don't think it's a good idea, not at this point, Chris. First of all, you need to provide for the nation's security regardless of your financial situation, and there's no bigger deficit hawk in Congress than I am.

I think we need to start coming to grips with this. We're going to have a big vote coming up on the debt ceiling. I don't think we should vote to raise the debt ceiling until we have a strategy in place to get our deficits down.

So we've got to take the fiscal situation seriously, but, number one, national security comes first.

Number two, we've got to look at cutting spending in other parts of the budget before we even talk about raising taxes.

It's impossible to find a more perfectly representative face for the rotted Washington establishment than Evan Bayh.  He is the pure expression of virtually every attribute that makes the Beltway so dysfunctional, deceitful and corrupt. 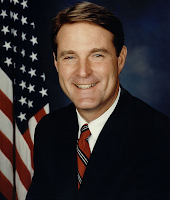 Bayh wants to send other people into every proposed war he can find and keep them there forever ever without ever bearing any of the costs himself -- not in military service for him or his family nor even in higher taxes to pay for his glorious wars.  Sacrifice is for everyone other than Evan Bayh and his friends.  He runs around praising himself as a "deficit hawk" while recklessly supporting wars and indefinite occupations that the country can't afford and which drive us further into debt.  He feigns concern over the "deficit" only when it comes time to deny ordinary Americans benefits which he and his family already possess in abundance.  He is a loyal servant to the insurance and health care industries over his own constituents -- as his wife sits on the Boards of numerous health care giants, who, right when Bayh became a Senator, began paying her millions of dollars in cash and stock.  And this Sermonizer of Personal Responsibility is the ultimate by-product of nepotism, following faithfully and effortlessly in the footsteps of his Daddy-Senator, whose seat he now occupies.  The fact that he's a Democrat -- and was Obama's close-second choice for Vice President -- just underscores how bipartisan these afflictions are.

When the sad and destructive history of the U.S. over the last decade is written, the coddled, nepotistic, self-serving face of Evan Bayh should be prominently included.  It embodies virtually every cause.

As US Consigns Iranians to Death, Corporate Media Look the Other Way
More in:
Mike Huckabee, Iran, British Petroleum (BP)

Michael Winship
No Justice, No Peace, No Leader at the Top

Will Bunch
Donald Trump Needs to Go. And No, We Can’t Wait Until November

Thom Hartmann
Yes, the Looting Must Stop
END_OF_DOCUMENT_TOKEN_TO_BE_REPLACED
Connect With Us

END_OF_DOCUMENT_TOKEN_TO_BE_REPLACED

Improbably, the backstory of the vicious barking clown's latest cheap stunt is as slimy as the Bible-brandishing con itself. When Barr's thugs burst in to clear St. John's Church - "with their black shields and the whole bit" - they ejected and gassed clergy there to support protesters. Later, pastors of color turned up to warn, “God is always on the side of the oppressed." So did a devout George Floyd by video: In the end, he admonishes the wayward, "It's gonna be you and God."
Read More...
END_OF_DOCUMENT_TOKEN_TO_BE_REPLACED