WASHINGTON - Public disclosure of multinational corporations’ disaggregated profits and taxes is steadily progressing toward a global norm as investors, businesses, and policymakers have increasingly taken steps toward transparency, according to a new study published Tuesday by the Financial Accountability and Corporate Transparency (FACT) Coalition. 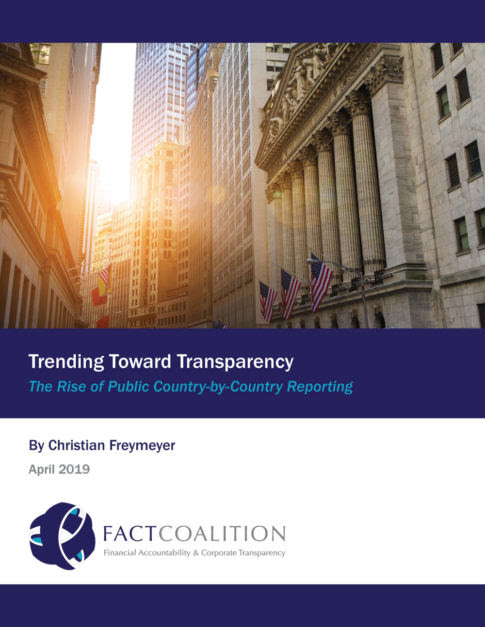 The FACT Coalition is a non-partisan alliance of more than 100 state, national, and international organizations working toward a fair tax system that addresses the challenges of a global economy and promoting policies to combat the harmful impacts of corrupt financial practices.

Titled “Trending Toward Transparency: The Rise of Public Country-by-Country Reporting,” the report highlights the growing list of enacted and proposed rules around the world to mandate increased disclosures that are promoted among various sectors of the investing, business, and policymaking communities.

“The rapid shift from complete secrecy to increasing transparency has been remarkable,” said Gary Kalman, executive director of the FACT Coalition. “Before the financial crisis, no one was seriously talking about disaggregated corporate tax reporting. Fast forward a decade, and 77 countries now require multinationals to file country-by-country reports privately to tax authorities; oil, gas, and mining companies in Europe, Canada, and elsewhere must disclose the information publicly; large banks in Europe also have public disclosure requirements; and the largest sustainable investment standards-setting body has proposed new tax transparency requirements that include public country-by-country reporting.”

"The evidence suggests we are quickly reaching a turning point," said Christian Freymeyer, researcher and author of the report. "Investors see the value, policymakers see the benefits, and businesses see the inevitability of greater transparency. It's only a matter of time before tax transparency is accepted and expected of financial disclosure."

“When representatives from the accounting, investment and tax justice sectors all agree, you know you are headed toward real reform,” added Mr. Kalman. To better inform investors, the report calls on the U.S. Congress, the Securities and Exchange Commission, and the Financial Accounting Standards Board to specifically require multinational corporations to publicly disclose, on an annual, country-by-country basis:

In addition to public country-by-country reporting, the report recommends a number of additional tax-related disclosures (see pages 25–26), which would be useful to shareholders.

We seek an honest and fair international tax code, greater transparency in corporate ownership and operations, and commonsense policies to combat the facilitation of money laundering and other criminal activity by the financial system.

Ralph Nader
S. David Freeman: Seven Decades of Participating in Power for All of Us

Raúl Carrillo
We Need a Public Option for Banking
END_OF_DOCUMENT_TOKEN_TO_BE_REPLACED

As an impeached dumpster fire raves - Twitter was mean to him! Masks mean "social control"! - his abysmal failures have seen us not just hit the grisly milestone of 100,000 deaths but soar right past it: Thursday's toll was 102,794 and rising fast. In response, the Lincoln Project's harrowing new ad savages his "great job" claims with fast-accruing body bags, a chilling echo-chamber of his predicted "close to zero" deaths, and an urgent message: “100,000 dead Americans. One wrong president.”
Read More...
END_OF_DOCUMENT_TOKEN_TO_BE_REPLACED