Reality Check: The End of Growth in the Tar Sands. So Now What?

A managed decline is highly preferable to an unmanaged one, but it requires recognition that the decline part is inevitable

Almost everyone understands that the world will eventually wean itself off of fossil fuels, hopefully sooner than later. A rarely discussed consequence of this is that there is no reasonable scenario in which the high cost tar sands sector remains the last man standing as the transition takes hold. Indeed, this dynamic appears to be already in play.

In a new briefing note published Thursday, we use industry data to provide a snapshot of a tar sands sector on the precipice of decline. It won’t necessarily be a surprise that capital expenditure (capex) for new projects has taken a downturn in recent years, but it may be a surprise that there is currently no commitment to project construction beyond 2020.

Figure 1 (below) shows the steep decline in project approvals since 2013. Note that in 2017, no new capacity has been approved to date. 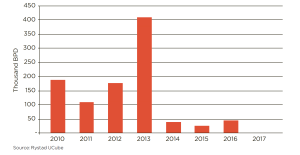 Figure 2 (below) shows the annual capex spent on developing new tar sands production capacity since 2000. Projected capex beyond 2016 only includes investment in projects that have already been approved. This capex ends in 2019 as currently under construction projects begin production. For that to change, new projects will have to be sanctioned by oil companies. 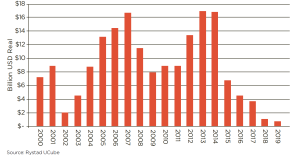 This is a dramatic change of events in a sector that just a few years ago was anticipating major expansion and sustained growth. Instead, the sector is facing the end of any significant capex in new growth, and the challenge of trying to squeeze a profit out of projects that were sanctioned in a $100 per barrel world in one that is instead moving towards decarbonization.

What matters now is that decision makers, thought leaders, and citizens wrap their heads around this new reality. If there is a failure to step in and manage the inevitable decline in the sector as production dwindles and profits shrink, workers, communities, and the economy are going to be the ones that suffer.

Companies and industry advocacy groups (like CAPP) are quick to point to rising production as a sign of resilience, but the only production growth that is happening is a relict of decisions made several years ago before the oil price crash. These projects are still lumbering toward their start-up dates because of the long construction timelines that are common to the sector. What is less discussed is the exodus of major international oil companies that have seen the writing on the wall, leaving a handful of Canadian companies holding the reins of an industry that has likely boomed for the last time.

Because tar sands projects are so capital intensive, take a long time to build, and produce for many decades, investors need to feel confident that oil prices are going to be sustained at high enough levels to make massive up-front capital expenditures worth it. This isn’t the picture that they see right now. In the near-term, U.S. shale production is likely to keep a lid on prices as the U.S. frackers continue to drill-baby-drill no matter the harm they cause. Goldman Sachs analysts currently expect prices to stabilize around $55 for the foreseeable future. This is at least $20 below the price needed to trigger significant new activity in the tar sands.

In the longer term, the combination of climate action, electric vehicles and clean technology development and the push in Europe and Asia for cleaner air, are poised to radically change the oil market forever. The boom and bust cycle we have seen for the last century and a half may just be a bust.

Suggesting, as government and industry are doing, that the best course of action in response to a struggling economy is to build more infrastructure that requires sustained high oil prices and assumes a global failure to address climate change is not only misleading but reckless, and risks blowing up a bubble of debilitating stranded assets.

Before anyone suggests that there is a silver lining in that the climate work here is done (i.e. the end of the tar sands is happening anyway), do not speak too soon. The fossil fuel industry specializes in making itself seem indispensable, and they will be digging in their heels over the coming months and years to do as much climate damage as possible while they still can. The evidence can be seen in the increasing clamour to ditch regulations and support new infrastructure.

The movement has done incredible things to delay and stop infrastructure, and those battles will continue as the industry continues to use convoluted arguments to demand new pipelines (for example).

A managed decline is highly preferable to an unmanaged one, but it requires recognition that the decline part is inevitable, which is the conversation we hope to trigger.

END_OF_DOCUMENT_TOKEN_TO_BE_REPLACED

Wow. The dog whistle's become a fog horn these dark and threatening days with Trump's new re-election merch: An "America First" - whiff of fascism here - t-shirt that looks queasily, uncannily like the Iron Eagle, the symbol of the Nazi Party. " It’s not an accident," wrote Bend the Arc, which also caught the recent concentration-camp-style red triangles. "Bigotry is their entire brand." And yes, there are eagle images - U.S. seal, Marines - that aren't Nazi symbols. This...is.
Read More...
END_OF_DOCUMENT_TOKEN_TO_BE_REPLACED