Unlike 2016, this will be a battle with the enemy named out loud and its deeds detailed

Bernie Sanders is not backing down this time. (Photo: Paul Weaver / Flickr)

One of my biggest concerns about the 2016 Sanders campaign was that, at least at the beginning, it was too easily forced to apologize for attacks on supposed "allies of progressives" in the Democratic ecosystem — because "unity." 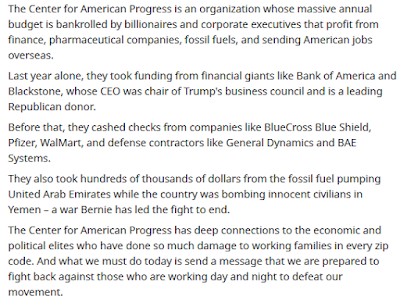 He was immediately accused by the rest of the establishment, falsely, of attacking Planned Parenthood clinics. And he backed down, unwisely in my view. (For more on that episode, read the first few paragraphs of this piece.)

Well, the highly Clintonist, highly corporate establishment is at it again, in the form of the corrupt Center for American Progress (CAP) and its online publication ThinkProgress. (For more on their corruption, see also here and here.) ThinkProgress published a video critical of Sanders, as Lee Fang (who also delves into their corruption) explains here:

The Center for American Progress, which sponsors ThinkProgress, is led by board president Tom Daschle, who is a registered lobbyist for Comcast CVS Health-Aetna, and the Blue Cross Blue Shield Association. TP used to criticize those companies, now they carry their water.

In response to that video Sanders sent CAP a letter, saying in part:

Center for American Progress leader Neera Tanden repeatedly calls for unity while simultaneously maligning my staff and supporters and belittling progressive ideas. I worry that the corporate money CAP is receiving is inordinately and inappropriately influencing the role it is playing in the progressive movement. (emphasis mine)

Team Sanders then went a whole lot further than that in a public fundraising letter, parts of which are reproduced below. Note the expansion of the "corporate money" point from the CAP letter, and also the directness (emphasis mine throughout):

"We are under attack"

Just like that, our campaign is under attack from the corporate establishment.

This week, an organization that is the epitome of the political establishment — the Center for American Progress (CAP) — unleashed and promoted an online attack video against Bernie.

And behind the scenes on the day Bernie introduced his Medicare for All bill, they held a conference call with reporters attacking the bill.

That is the Center for American Progress’ real goal. Trying to stop Medicare for All and our progressive agenda.

CAP's leadership has been pretty upfront about their disdain for Bernie — and for all of us. They see our political revolution as a threat to their privilege and influence. ...

The Center for American Progress is an organization whose massive annual budget is bankrolled by billionaires and corporate executives that profit from finance, pharmaceutical companies, fossil fuels, and sending American jobs overseas.

Last year alone, they took funding from financial giants like Bank of America and Blackstone, whose CEO was chair of Trump's business council and is a leading Republican donor.

Before that, they cashed checks from companies like BlueCross Blue Shield, Pfizer, WalMart, and defense contractors like General Dynamics and BAE Systems.

They also took hundreds of thousands of dollars from the fossil fuel pumping United Arab Emirates while the country was bombing innocent civilians in Yemen – a war Bernie has led the fight to end.

The Center for American Progress has deep connections to the economic and political elites who have done so much damage to working families in every zip code. And what we must do today is send a message that we are prepared to fight back against those who are working day and night to defeat our movement....

The letter also names a few of the companies and countries that bankroll CAP — Walmart, Bank of America, Blue Cross, Blackstone, the UAE. He could have listed a great many more. There are countless stories emerging from former ThinkProgress writers about CAP leadership squelching aggressive reporting because their reports were negatively affecting CAP fundraising. Read this twitter thread by former ThinkProgress reporter Zaid Jilani to see some of those. There are others as well.

Bernie Sanders is not backing down this time. Unlike 2016, this will be a battle with the enemy named out loud and its deeds detailed. Looks like the fight, the one our country has been avoiding for years, is finally on.

Thomas Neuburger is an essayist, poet and story writer. He has published political analysis under the pen name Gaius Publius since 2010.

We Must Reclaim Voting Rights as a Moral Imperative

The Collapse of the American Empire
More in:
U.S.
,
Bernie Sanders, Election 2020, Democracy, Medicare for All, Comcast, Tom Daschle, Center for American Progress

Adeline Lee
Covid-19 May Fade, But Will the Tracking Tools Built to Fight It?
END_OF_DOCUMENT_TOKEN_TO_BE_REPLACED
Connect With Us

END_OF_DOCUMENT_TOKEN_TO_BE_REPLACED

Stupidity reigns: A year after the deadly fact, the U.S. still has over 70,000 new COVID cases a day thanks to recalcitrant morons like Gym "What-sexual-assault?" Jordan, who spent a House hearing shrieking at Dr. Fauci about "lost liberty" and demanding, "When do Americans get their freedom back?" A weary Fauci: It's not "a freedom thing," it's "a public health thing." It finally took Maxine Waters to quash Jordan with, "Shut your mouth." Amen, auntie.
Read More...
END_OF_DOCUMENT_TOKEN_TO_BE_REPLACED