So progressive Democrats have seized on an op-ed by the group Third Way — an op-ed attacking Elizabeth Warren and Bill de Blasio for their terrible, horrible economic populism — as a way to start reclaiming the party from the “centrists”. And it’s working: the centrists are very much on the run.

Why? Part of the answer is that the Democratic party has become more progressive. But I would argue that the centrists are also suffering from their own intellectual bankruptcy.

I mean, going after Warren and de Blasio for not being willing to cut Social Security and their “staunch refusal to address the coming Medicare crisis” ??? Even aside from the question of exactly what the mayor of New York has to do with Medicare, this sounds as if they have been living in a cave for years, maybe reading an occasional screed from the Pete Peterson complex.

On Social Security, they’re still in the camp insisting that because the system might possibly have to pay lower benefits in the future, we must move now to cut future benefits. Oh, kay.

But anyway, they declare that Medicare is the bigger issue. So what’s this about “staunch refusal” to address Medicare? The Affordable Care Act contains lots of measures to limit Medicare costs and health care more generally — it’s Republicans, not progressive Democrats, who have been screaming against cost-saving measures (death panels!). And health cost growth has slowed dramatically, feeding into much better Medicare projections. Here’s how the CBO projections have changed since Obama took office: 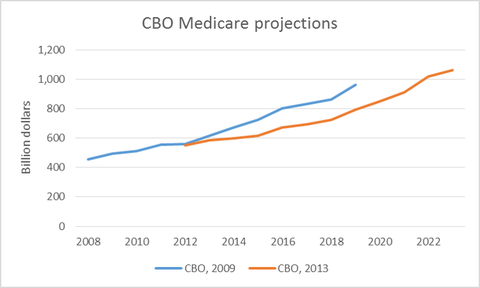 So what does Third Way think it would mean to “address the Medicare crisis”? They don’t say. But my strong guess is that they mean raising the Medicare age; living in their cave, they probably haven’t gotten the memo (literally) from CBO concluding that raising that age would hardly save any money.

It’s just so tired and tiring. If being a “centrist” means fact-free denunciations of progressives for not being willing to cut entitlements, who needs these guys?

Paul Krugman is professor of Economics and International Affairs at Princeton University and a regular columnist for The New York Times. Krugman was the 2008 recipient of the Nobel Prize in Economics. He is the author of numerous books, including The Conscience of A Liberal, The Return of Depression Economics, and his most recent, End This Depression Now!.

Mike Lofgren
Don't Let the Corruption of the Powerless Bring Down the Democrats...
END_OF_DOCUMENT_TOKEN_TO_BE_REPLACED
Connect With Us

END_OF_DOCUMENT_TOKEN_TO_BE_REPLACED

This beleaguered Fourth evokes the searing words of Frederick Douglass, a black man furiously recounting to his white audience "the immeasurable distance between us," the day exposing "your shouts of liberty and equality" as "hollow mockery...mere bombast, fraud, deception." In this historic moment, Daveed Diggs - "Hamilton"'s Thomas Jefferson - reads from Douglass to images of a still-racist America, asking, "Where is the country where my people are safe?"
Read More...
END_OF_DOCUMENT_TOKEN_TO_BE_REPLACED