A Common Trick Used by Communists

Chapter 7,842 in the never-ending saga of FBI idiocies uncovers a memo charging that Frank Capra's "It's A Wonderful Life" represents an attempt to "discredit bankers" and "malign the upper class...as mean and despicable characters," the most insidious commie plot of all. And we pay for this.

Capra Was A Commie Simp

The
other day I wrote an indignant post about Glenn Beck appropriating
"It's A Wonderful Life" for his bizarroworld capitalist philosophy, but I
didn't realize that the FBI had determined that the movie was a
subversive Commie plot:

There
is submitted herewith the running memorandum concerning Communist
infiltration of the motion picture industry which has been brought up to
date as of May 26, 1947....

With regard to the picture "It's a
Wonderful Life", [redacted] stated in substance that the film
represented rather obvious attempts to discredit bankers by casting
Lionel Barrymore as a "scrooge-type" so that he would be the most hated
man in the picture. This, according to these sources, is a common trick
used by Communists.

[redacted]
recalled that approximately 15 years ago, the picture entitled "The
Letter" was made in Russia and was later shown in this country. He
recalled that in this Russian picture, an individual who had lost his
self-respect as well as that of his friends and neighbors because of
drunkenness, was given one last chance to redeem himself by going to the
bank to get some money to pay off a debt. The old man was a sympathetic
character and was so pleased at his opportunity that he was extremely
nervous, inferring he might lose the letter of credit or the money
itself. In summary, the old man made the journey of several days
duration to the bank and with no mishap until he fell asleep on the
homeward journey because of his determination to succeed. On this
occasion the package of money dropped out of his pocket. Upon arriving
home, the old man was so chagrined he hung himself. The next day someone
returned the package of money to his wife saying it had been found.
[redacted] draws a parallel of this scene and that of the picture
previously discussed, showing that Thomas Mitchell who played the part
of the man losing the money in the Capra picture suffered the same
consequences as the man in the Russian picture in that Mitchell was too
old a man to go out and make money to pay off his debt to the banker. 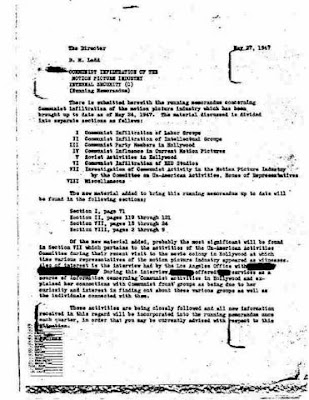 I suppose this is common knowledge, but it escaped my notice until now. Some things never change.

Already, a sea change. Joe Biden and Kamala Harris held a searing memorial Tuesday for 400,000 Americans killed by COVID, the first public acknowledgment of the loss inflicted by a sick deadbeat missing the decency gene. "To heal, we must remember," declared Biden, his empathy feeling like water in the desert to many who didn't realize the depth of their thirst - especially after a Michigan nurse sang "Amazing Grace." "I'm not crying - you're crying," said one. "Let the healing begin."
Read More...
END_OF_DOCUMENT_TOKEN_TO_BE_REPLACED